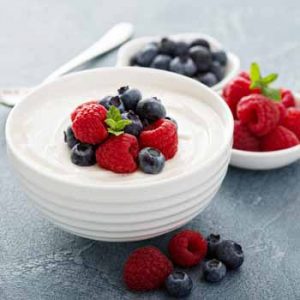 Eating a probiotic food such as yoghurt every day could improve both . [Photo: Bigstock]

The small, preliminary study, conducted by scientists with UCLA’s Gail and Gerald Oppenheimer Family Center for Neurobiology of Stress and the Ahmanson-Lovelace Brain Mapping Center at UCLA, appears in the June edition of the peer-reviewed journal Gastroenterology.

“Many of us have a container of yoghurt in our refrigerator that we may eat for enjoyment, for calcium or because we think it might help our health in other ways,” said Dr. Kirsten Tillisch, an associate professor of medicine at UCLA’s David Geffen School of Medicine and lead author of the study.

“Our findings indicate that some of the contents of yoghurt may actually change the way our brain responds to the environment. When we consider the implications of this work, the old sayings ‘you are what you eat’ and ‘gut feelings’ take on new meaning.”

For this study researchers randomised 45 physically and emotionally healthy women, ages 18 to 50, into one of three groups – no product, a control non-probiotic yoghurt, or probiotic yoghurt that contained B. lactis CNCM I-2494, yoghurt symbiosis L. bulgaricus, S. thermophilus, and L. lactis.

Patients in the control and probiotic groups consumed 125g of product twice daily over the 4-week intervention. The women were then asked to take part in tasks designed to provoke an emotional, anxiety-like response.

Emotional reactivity was measured via a blood oxygen level-dependent (BOLD) response indicating brain activity. Patients were scanned with function MRI (fMRI) before and after the task to measure this response.

The researchers were surprised to find that the brain effects could be seen in many areas, including those involved in sensory processing and not merely those associated with emotion.

For instance, compared with the women who didn’t consume the probiotic yoghurt, those who did showed lower levels of activity in the areas of the brain associated with emotion and pain, but increased activity in areas associated with decision making.

The UCLA researchers are seeking to pinpoint particular chemicals produced by gut bacteria that may be triggering the signals to the brain. They also plan to study whether people with gastrointestinal symptoms such as bloating, abdominal pain and altered bowel movements have improvements in their digestive symptoms which correlate with changes in brain response.

Interestingly they also note that in demonstrating the brain effects of probiotics, the study also raises the question of whether repeated courses of antibiotics can affect the brain, as some have speculated.

Antibiotics are used extensively in neonatal intensive care units and in childhood respiratory tract infections, for instance, and their effect of suppressing the normal microbiota may have long-term consequences on brain development, they said. Recent studies have suggested that probiotics may help heal some of the damage caused by antibiotics.

If there is a caution, apart from the small size of the study, it is that funding for the study came from Danone – a global player in the probiotic yoghurt market. In addition, several of the researchers have direct links to the company.  Nevertheless, the study’s findings do have a basis in animal research which has demonstrated that beneficial gut bacteria reduced behaviours associated with stress, anxiety and depression in mice.

Speaking in the press Tillisch noted that “Time and time again we hear from patients that they never felt depressed or anxious until they started experiencing problems with their gut. Our study shows that the gut-brain connection is a two-way street.”

Eating a probiotic food such as yoghurt every day could improve both . [Photo: Bigstock]