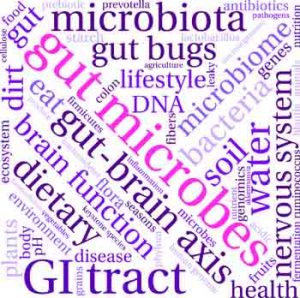 The gut is known as the 'second brain' - and may hold the key to preventing and treating Parkinson's and other neurological diseases. [Photo: Bigstock]

Treating Parkinson’s through the gut – instead of the brain

The incidence of this disease increases with age, but an estimated 4% of people with Parkinson’s are diagnosed before the age of 50 and men are one and a half times more likely to have Parkinson’s than women.

Parkinson’s is caused by the accumulation of abnormally shaped alpha-synuclein proteins in neurons, leading to particularly toxic effects in dopamine-releasing cells located in brain regions that control movement.

As a result, patients experience debilitating symptoms such as tremors, muscle stiffness, slowness of movement, and impaired gait. First-line therapies currently focus on increasing dopamine levels in the brain, but these treatments can cause serious side effects and often lose effectiveness over time.

To address the need for safer and more effective treatments, scientists from the California Institute of Technology turned to gut microbes as an intriguing possibility.

Patients with Parkinson’s disease have an altered gut microbiome, and gastrointestinal problems such as constipation often precede motor deficits by many years in these individuals.

» Conventional treatments for Parkinson’s disease focus on increasing dopamine levels in the brain – an approach that can cause serious side effects and often lose effectiveness over time.

» Emerging evidence shows that the balance of bacteria in the gut could have a major role to play in the development of diseases like Parkinson’s and may even be able to ameliorate symptoms.

» If these and other findings pan out, the best target for the treatment and prevention of a whole range of neurodegenerative diseases may be through the gut, rather than the brain.

Moreover, gut microbes have been shown to influence neuronal development, cognitive abilities, anxiety, depression, and autism. However, experimental evidence supporting a role for gut microbes in neurodegenerative diseases has been lacking.

The researchers studied a strain of mouse predisposed to a Parkinson’s-like disease either in normal, non-sterile cages or in a germ-free environment.

In fact, these mice showed almost normal performance on tasks such as traversing a beam, removing an adhesive from their nose, and climbing down a pole.

Antibiotic treatment had a similar effect as the germ-free environment on ameliorating motor symptoms in mice predisposed to Parkinson’s-like disorders.

By contrast, mice raised in the germ-free cages showed worse motor symptoms when they either were treated with short-chain fatty acids normally produced in the gut (some of which, at high levels, can be inflammatory) or received faecal transplants of gut microbes from patients with Parkinson’s disease.

Taken together, the results published in the journal Cell suggest that gut microbes exacerbate motor symptoms by creating an environment that could favour the accumulation of misfolded protein aggregates.

“We have discovered for the first time a biological link between the gut microbiome and Parkinson’s disease. More generally, this research reveals that a neurodegenerative disease may have its origins in the gut, and not only in the brain as had been previously thought,” says senior study author Sarkis Mazmanian. “The discovery that changes in the microbiome may be involved in Parkinson’s disease is a paradigm shift and opens entirely new possibilities for treating patients.”

In this study, gut microbes interacted with a specific genetic factor in the mice to influence the risk for developing Parkinson’s disease. Genetically normal mice that were not predisposed to Parkinson’s disease did not develop motor symptoms after receiving faecal transplants from patients. But say the researchers other genetic and environmental factors, such as pesticide exposure, also play a similar role in the development of the disease and the microbiota may also influence these.

The findings suggest that probiotic or prebiotic therapies have the potential to alleviate the symptoms of Parkinson’s disease. However, antibiotics or faecal microbe transplants are far from being viable therapies at this time.

“Long-term, high-strength antibiotic use, like we utilised in this study, comes with significant risk to humans, such as defects in immune and metabolic function,” co-author Timothy Sampson cautions. “Gut bacteria provide immense physiological benefit, and we do not yet have the data to know which particular species are problematic or beneficial in Parkinson’s disease.”

It is therefore critical, say the scientists, to identify which pathogenic microbes might contribute to a higher Parkinson’s disease risk or to development of a more severe form of the disease. This research is underway as is research to identify specific bacterial species that may protect patients against motor decline.

Parkinson’s is a neurodegenerative disease – an umbrella term for a range of conditions which primarily affect the neurons in the human brain.

Neurons are the building blocks of the nervous system which includes the brain and spinal cord. Neurons normally don’t reproduce or replace themselves, so when they become damaged or die they cannot be replaced by the body. Examples of neurodegenerative diseases include Parkinson’s disease, Alzheimer’s disease, amyotrophic lateral sclerosis (ALS), motor neuron disease (MND) and Huntington’s disease (HD).

Neurodegenerative diseases are incurable and debilitating conditions that result in progressive degeneration and / or death of nerve cells.

The idea that gut microbes may be involved in not just Parkinson’s but other neurodegenerative diseases such as Alzheimer’s and (ALS) is steadily gaining traction – even though most of the evidence is based on laboratory, insect and animal models.

Each of these diseases is characterized by clumped, misfolded proteins and inflammation in the brain. In more than 90 percent of cases, physicians and scientists do not know what causes these processes to occur.

In October of this year research, supported by The Michael J. Fox Foundation and conducted at University of Louisville School of Medicine concluded that these processes may be triggered by proteins made by our gut bacteria (the microbiota). Their research has revealed that exposure to bacterial proteins called amyloid that have structural similarity to brain proteins leads to an increase in clumping of the protein alpha-synuclein in the brain. The study was published in the prestigious journal, Nature.

Another study from the University of Iowa looked at the problems from a different angle and found that the gut may play a pivotal role in preventing the onset of Parkinson’s disease. Cells located in the intestine spark an immune response that protects nerve cells, or neurons, against damage connected with Parkinson’s disease. Acting like detectives, the immune intestinal cells identify damaged machinery within neurons and discard the defective parts. That action ultimately preserves neurons whose impairment or death is known to cause Parkinson’s.

If these and other findings pan out, it suggests that the best target for the treatment and prevention of neurodegenerative diseases may be through the gut, rather than the brain.

The gut is known as the 'second brain' - and may hold the key to preventing and treating Parkinson's and other neurological diseases. [Photo: Bigstock]