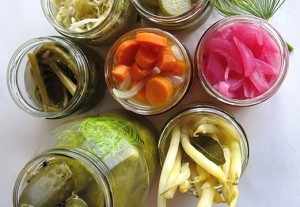 Natural Health News — A new study suggests that the friendly bacteria in lacto-fermented foods such as pickles, kimchi and sourdough can help lower cholesterol.

A total of 60 volunteers, aged 18-65 years old, participated in this small controlled, randomised, double-blind trial which investigated the effects of a mixture of three strains of probiotic Lactobacillus plantarum (CECT 7527, CECT 7528 and CECT 7529) on cholesterol levels in people with high cholesterol.

A significant overall reduction of 13.6% in total cholesterol (TC) levels was observed after 12 weeks of consumption in the L. plantarum group when compared with the placebo group.

The effect on the oxidised cholesterol is very encouraging and important. Doctors now believe that it is not that LDL cholesterol is inherently ‘bad’ or ‘unhealthy’ but that it is more prone to damage by free radicals. The oxidation of LDL cholesterol is what leads to the build up of plaques on artery walls which we associate with heart disease and stroke risk

Amongst those with the lowest cholesterol the L. plantarum treatment only showed a reduction of 9.4% for total cholesterol after 12 weeks of consumption when compared with the placebo group.

Thus say the authors the probiotic treatment is of particular benefit or those who are most at risk of cardiovascular disease.

A complex role in health

Probiotics are live organisms, bacteria or yeast, that are beneficial to humans. The probiotic strain used in this study Lactobacillus plantarum is commonly found in lacto-fermented foods like sauerkraut, pickles, brined olives, Korean kimchi, Nigerian Ogi, sourdough, kefir and some cheeses and fermented sausages.

The doses used in this study are much higher than typically found in these food products, especially commercially prepared ones. However, it does seem to support the views of groups like the Weston A Price Foundation – which have long suggested that we need to learn to prepare and eat more of these types of foods, which were once much more common in our diets.

Understanding the link with metabolic syndrome

The association between fermented milks and cholesterol-lowering has been suggested for decades. But until recently, there have not been many well conducted randomised, controlled trials that show specific probiotic-induced improvements in blood lipids.

In one recent study involving 114 people researchers tested the effect of live yoghurt containing micro-encapsulated Lactobacillus reuteri NCIMB 30242, or a placebo on adults with high cholesterol

After a 6 week intervention period, there were significant reductions in LDL-cholesterol (8.92%) and total cholesterol (4.81%) compared to those taking placebo. Recently, the same group performed a second trial with similar results.

These kinds or results dovetail with recent suggestions that gut microbiota has a role in metabolic syndrome. People who are overweight or who have diabetes tend to have an altered gut microbiota; a situation that can be reversed by dieting and related weight loss.

As a  recent review article suggests, the relationship is a complex one, involving host, microbial and environmental factors. But understanding the role of microbes – both ones we harbour and ones we consume – in metabolic syndrome may provide an unexpected approach to managing this important health concern.