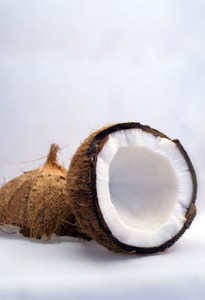 Q – I’ve seen some stories about coconut oil being a cure for Alzheimer’s disease.  Do you know if this is true?

A – This story has been in and out of the news for a while. Last year the American physician, Dr. Bruce Fife , who has been dubbed “Dr. Coconut” for his research into and enthusiastic championing of coconut oil’s healing properties.

According to Dr. Fife’s website: “Coconut is highly nutritious and rich in fibre, vitamins, and minerals. It is classified as a ‘functional food’ because it provides many health benefits beyond its nutritional content. Coconut oil is of special interest because it possesses healing properties far beyond that of any other dietary oil and is extensively used in traditional medicine among Asian and Pacific populations”.

Dr Fife, has taken up the cause and all about it in his book Stop Alzheimer’s Now.

Central to his book is a the story of Doctor Mary Newport about how she used coconut oil to improve her husband’s Steve’s Alzheimer’s after just 35 days of taking virgin coconut oil (VCO).

Dr Newport set about digging up data on the new drug called AC-1202 (later known as Axona). She learned that the active ingredient in the drug was a type of fat, medium-chain triglycerides (MCT). MCT are used to treat epilepsy and also placed in hospital feeding programs for newborns to help ensure good brain development.

MCT is also found in great quantities in the oil extracted from the fresh meat of coconuts.

Diabetes of the brain

Alzheimer’s patients suffer from a kind of diabetes of the brain. That may sound strange but the idea has been around a long time. The brain is a hungry organ and needs constant fuel. In Alzheimer’s something prevents it from utilising glucose properly. But, it appears, the brain can utilize MCT, or specifically the ketones which are produced as MCT is metabolised in the body, as an alternative energy source. You can read Dr Newport’s  referenced paper here.

The ketone theory is also the basis of the Keto-dementia Diet recommended by Dr Fife.

While there are no trials of virgin coconut oil in Alzheimer’s research has shown that  people with dementias, such as Alzheimer’s, experience  a drop in glucose metabolism, often years before people begin to exhibit symptoms.

In 2008, the medical journal Neurotherapeutics published the study, Ketone Bodies as a Therapeutic for Alzheimer’s Disease. This research demonstrated the brain’s apparent ability to use ketones as an alternative energy source.

It was on this basis that Dr Newport put her husband on a novel feeding program. Instead of using Axona at £60 ($100) per month with 1 dose a day, Mary used VCO – at a cost of £6 ($10) a month – giving him 2 tablespoons of a mixture of VCO and its pharmaceutical isolate, MCT, with every meal.

It is recommended that MCT supplements be avoided by those with diabetes and liver problems and by pregnant and breastfeeding women.

Adding virgin coconut oil to the diet of an Alzheimer’s patient is unlikely to cause harm and may help. Whether it is really a complete cure for Alzheimer’s remains an unknown but intriguing possibility.

Update: Since the publication of this article more data has come out suggesting that Alzheimer’s is a kind of type-3 diabetes and that a steady diet of fast or junk food or just food that doesn’t give your brain what it needs to stay healthy has been linked to the disease.  A study in July highlighted the connections between diabetes and Alzheimer’s.  A recent article in the journal New Scientist suggested that the connection between poor diet and Alzheimer’s is becoming increasingly convincing. The accompanying editorial called the link “the ultimate food scare” and suggested that “If correct, this has enormous, and grave, implications. The world already faces an epidemic of diabetes. The prospect of a parallel epidemic of Alzheimer’s is truly frightening, in terms of human suffering and monetary cost.”