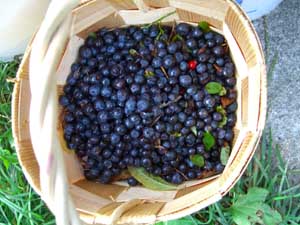 The  study, co authored by researchers at Harvard University and the University of East Anglia in the UK, adds to the growing body of evidence that regular consumption of some flavonoids can have a marked effect on human health. Recent studies have shown that these compounds can offer protection against a wide range of diseases including heart disease, hypertension, some cancers and dementia.

Flavonoids are a group of naturally occurring, bioactive compounds found in many plant-based foods and drinks. In this study the main protective effect was from higher intake of anthocyanins, which are present in berries and other fruits and vegetables including aubergines, blackcurrants and blackberries.

This latest study is the first study in humans to show that flavonoids can protect neurons against diseases of the brain such as Parkinson’s, but only in men

Around 130,000 men and women took part in the research. More than 800 (438 men and 367 women) had developed Parkinson’s disease within 20 years of follow-up. After a detailed analysis of their diets and adjusting for age and lifestyle, male participants who ate the most flavonoids were shown to be 40% less likely to develop the disease than those who ate the least.

In this study no similar link was found for total flavonoid intake in women. Yet when the effect of specific types of flavonoids were examined, regular consumption of anthocyanins, which are mainly found in berries, turned out to be associated with a lower risk to develop Parkinson’s disease in both men and women.

The research was led by Dr Xiang Gao of Harvard School of Public Health in collaboration with Prof Aedin Cassidy of the Department of Nutrition, Norwich Medical School at UEA.

According to Prof Gao said: “Interestingly, anthocyanins and berry fruits, which are rich in anthocyanins, seem to be associated with a lower risk of Parkinson’s disease in pooled analyses. Participants who consumed one or more portions of berry fruits each week were around 25% less likely to develop Parkinson’s disease, relative to those who did not eat berry fruits. Given the other potential health effects of berry fruits, such as lowering risk of hypertension as reported in our previous studies, it is good to regularly add these fruits to your diet.”

“This is the first study in humans to look at the associations between the range of flavonoids in the diet and the risk of developing Parkinson’s disease and our findings suggest that a sub-class of flavonoids called anthocyanins may have neuroprotective effects.”

The findings published in the journal Neurology now needs to be confirmed by larger clinical trials.

Parkinson’s disease is a progressive neurological condition affecting one in 500 people, which equates to 127,000 people in the UK. There are few effective drug therapies available.

The study is journal Neurology.