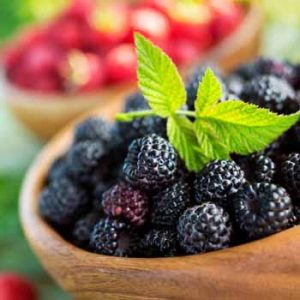 Black raspberries have been called the 'King of Berries' [Photo: Bigstock]

Are black raspberries the new superberries?

Natural Health News — As far as healthy foods go, berries make the top of the list.

Study after study shows that they contain potent antioxidants, which decrease or reverse the effects of free radicals – natural by-products of energy production that can play havoc on the body and that are closely linked with heart disease, cancer, arthritis, stroke or respiratory diseases.

When it comes to grabbing the headlines it is usually the exotic Goji, Acerola or Acai berries that grab the superfood spotlight. But for the health-savvy European consumer the native home-grown species could be even more alluring.

» Black raspberries are cultivated in several parts of the world.

» Previous research has suggested they are high in important antioxidant compounds such as anthocynins.

» A new study from Polish researchers compared black raspberries to red raspberries and blackberries, their closest cousins and found that the black raspberries has 3 times the total amount of antioxidants of the other fruits, suggesting greater health benefits.

A study from the University of Agriculture in Krakow shows what’s in store for Old Continent foodies in the berries department revealing that black raspberries (Rubus occidentalis), grown in Central Europe, show greater health benefits than either their better known cousins – raspberries or blackberries.

The Polish researchers assessed the antioxidant potential and health benefits of all three types of berries by measuring levels of phenolics and anthocyanins in each.

The researchers add that there was no significant difference fruits collected in either summer or autumn suggesting they could remain a solid staple on our diet throughout the seasons.

What are black raspberries?

Black raspberries are not a common sight in supermarkets yet – you’re more likely to find them at Farmer’s Markets. But high levels of ellagic acid, anthocyanins and antioxidants, have earned then the name “king of berries” in some quarters.

While there are few human trials, animal studies at Ohio State University have found significant decreases in colon tumours in rats and oesophageal tumours in mice fed black raspberries. Laboratory studies have shown that extracts of raspberries and blackberries may slow the growth of breast cervical, colon and oesophageal cancer cells.

Earlier this year Korean researchers found that 8 weeks of supplementation with a high-dose of black raspberry powder ( 312.5 mg per day twice daily, 2,500 mg of raspberries) was associated with significant reductions – around 3.3 mmHg – in systolic blood pressure, over a 24 hour period, in pre-hypertensive people. The study published in the journal Nutrition also suggested that the supplement decreased night-time systolic blood pressure by an average of 5.4 mmHg over eight weeks, compared to placebo.

Black raspberries have been called the 'King of Berries' [Photo: Bigstock]