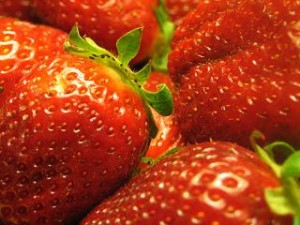 Natural Health News — Regular consumption of strawberries could help to significantly lower levels of bad cholesterol and triglycerides, and have other positive health effects besides, according to new research.

Several studies have already demonstrated the antioxidant capacity of strawberries, but a new experiment conducted by Italian and Spanish researchers has shown that these popular fruits also help to reduce cholesterol.

The team set up an month-long experiment in which they added 500 g of strawberries to the daily diets of 23 healthy volunteers. They took blood samples at the beginning and the end of this period to compare data.

Eating strawberries also improved other parameters such as the general plasma lipid profile, the levels of vitamin C and the antioxidant capacity of the blood (which help it to fight off free radical damage to blood cells), and platelet function (platelets prevent the kind of bleeding associated with strokes).

All of these measurements returned to their initial values 15 days after abandoning ‘treatment’ with strawberries.

As Maurizio Battino, researcher at Università Politecnica delle Marche (UNIVPM, Italy) and Director of the study, said: “This is the first time a study has been published that supports the protective role of the bioactive compounds in strawberries in tackling recognised markers and risk factors for cardiovascular diseases.”

The scientist admits that there is still no definitive evidence about which compounds of this fruit are responsible for these beneficial effects “but all the signs and epidemiological studies point towards anthocyanins, the vegetable pigments that afford them their red colour.”

The same research team has, in past studies, confirmed that eating strawberries also protects against ultraviolet radiation and reduces the damage that alcohol inflicts on the gut.

They also published another study this year, in the journal Food Chemistry, in which they demonstrated the overall effects of a 2-week daily consumption of strawberries. These confirm  some of what the current study has found, namely that strawberries can help raise blood levels of vitamin C as well as improve the antioxidant capacity of the blood,  suggesting that regular consumption may enhance body defences against free radical damage.

Other scientists have also confirmed the heart health benefits of strawberries and their extracts. In a 2010 study, eight weeks of supplementation with a freeze-dried strawberry powder was associated with am 11% reduction of LDL-cholesterol levels in obese people.

In 2009 a  study in overweight women reported that freeze-dried strawberry powder may reduce total and LDL cholesterol levels by 5 and 6%, respectively.

But make sure they’re organic

Strawberries are highly chemically intensive crops. Some farmers even joke that non-organic strawberries are so full of chemicals, they could be ground up and used as pesticides themselves. In the US alone some 65-five different pesticides, fungicides and herbicides are registered for use on strawberries. Residues of these pesticides remain in the fruit after harvest.

Most commercial strawberry growers use methyl bromide, a toxic, ozone-depleting chemical, to eradicate all fungus, nematodes, microorganisms and weeds, effectively killing every living thing in the soil where strawberry plants are grown.

In the US strawberries feature prominently in the Environmental Working Group’s annual Dirty Dozen list of most pesticide-contaminated produce. Buying organic is the only way to avoid this.

In the UK strawberries are also consistently rated as the most pesticide-laden foods (see the charts in our feature Five a day without pesticides).