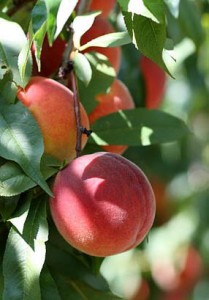 Natural Health News — Stone fruits like peaches, plums and nectarines have bioactive compounds that can potentially fight-off obesity-related diabetes and cardiovascular disease, according to new research.

The study by researchers at Texas A&M showed that the compounds in stone fruits could be a weapon against “metabolic syndrome,” in which obesity and inflammation lead to serious health issues, according to lead scientist Dr. Luis Cisneros-Zevallos.

“In recent years obesity has become a major concern in society due to the health problems associated to it,” said Cisneros-Zevallos, who also is an associate professor at Texas A&M University. “In the US, statistics show that around 30% of the population is overweight or obese, and these cases are increasing every year in alarming numbers.”

In the UK an estimated 60% of adults and 31% of children are overweight.

While he acknowledged that lifestyle, genetic predisposition and diet play a major role in one’s tendency toward obesity, “the major concern about obesity is the associated disease known as metabolic syndrome.

“Our studies have shown that stone fruits – peaches, plums and nectarines – have bioactive compounds that can potentially fight the syndrome,” Cisneros-Zevallos said. “Our work indicates that phenolic compounds present in these fruits have anti-obesity, anti-inflammatory and anti-diabetic properties in different cell lines and may also reduce the oxidation of bad cholesterol LDL which is associated to cardiovascular disease.”

What is unique to these fruits, he said, is that their mixture of the bioactive compounds work simultaneously within the different components of the disease.

“Our work shows that the four major phenolic groups – anthocyanins, clorogenic acids, quercetin derivatives and catechins – work on different cells – fat cells, macrophages and vascular endothelial cells,” he explained. “They modulate different expressions of genes and proteins depending on the type of compound.

“However, at the same time, all of them are working simultaneously in different fronts against the components of the disease, including obesity, inflammation, diabetes and cardiovascular disease,” he explained.

Commenting on the data, which was released ahead of its publication later this year, Cisneros-Zevallos said this is believed to be the first time that “bioactive compounds of a fruit have been shown to potentially work in different fronts against a disease.”

“Each of these stone fruits contain similar phenolic groups but in differing proportions so all of them are a good source of health promoting compounds and may complement each other,” he said.

Seasonal stone fruits are generally plentiful  towards the end of the summer and through autumn and are, in some ways, more versatile than many summer as they can be roasted, poached, stewed and preserved to enjoy throughout the winter months.

The same Texas A&M team has previously found, after testing more than 100 varieties of plums, peaches and nectarines that they match or exceed blueberries in terms of antioxidants and phytonutrients associated with disease prevention – and typically are less expensive than the much-touted blueberry.

In 2010 they also found that treatments with peach and plum extracts killed even the most aggressive type of breast cancer cells, whilst not harming normal cells in the process.