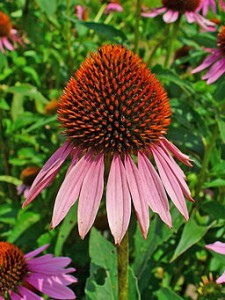 Natural Health News — The largest ever prevention trial using Echinacea has shown that an extract of the herb can significantly reduces the number and duration of colds.

The study was carried out by researchers from the Common Cold Centre in Cardiff University and was published in the open access, peer-reviewed medical journal Evidence-Based Complementary and Alternative Medicine. It claims to be the first clinical trial to investigate the safety and efficacy of long-term preventative treatment with Echinacea.

The  four-month trial involved 755 adults with a history of two or more colds a year. The participants were divided into two groups. One was treated with Echinaforce – an extract of Echinacea purpurea. The other half was given a placebo tincture that looked and tasted the same as the active treatment.

Study participants took three doses of 0.9ml daily; this corresponded to 2,400mg of Echinacea extract per day. That dose was increased to five daily doses if they experienced cold symptoms.

Each dose was diluted in water and held in the mouth for 10 seconds, a method described by researchers as having “maximum local anti-viral effects”.

The authors also found that significantly more people (52%) in the placebo group used aspirin, paracetamol, or ibuprofen to treat their cold while in the study, when compared to those in the Echinacea group

Based on their data the authors Echinacea conclude that is useful for: