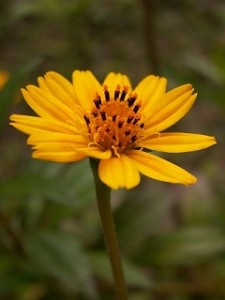 Weldelia chinensis is a member of the sunflower family and known to have anti-inflammatory properties [Image: Wikimedia commons]

Natural products can be as potent as man-made drugs

Natural Health News — A comprehensive study of natural remedy combinations, has found that certain combinations of natural products can be as effective as man-made drugs against specific disease processes.

The team of researchers from the National University of Singapore (NUS) and Tsinghua University, led by Professor Chen Yu Zong from the Department of Pharmacy at the NUS Faculty of Science, demonstrated that active ingredients in combinations of natural products can achieve the same level of potency as synthetic anticancer and antibacterial drugs.

The combinations they examined include traditional Chinese medicine such as the Realgar-Indigo naturalis formula (which contains realgar, an arsenic sulfide and indigo minerals, as well as the herb red sage root) designed for the treatment of leukaemia, Wedelia chinensis (a member of the sunflower family) commonly used in herbal medicines in Taiwan and southern China as an anti-inflammatory and black tea used in Japan for the treatment of gastroenteritis.

Through an analysis of more than 1,601 previous studies conducted on natural products and 190 human-made drugs, the researchers found that natural products are generally 10 to 100 times weaker than human-made drugs. This means, say the researchers that these natural remedies would have to be taken in larger quantities or for a longer period of time.

In addition to this common caveat, the researchers also suggested that while natural products can be as effective as synthetic ones, the chances of finding the ‘right’ combination of natural products was low.

Prof Chen said, “There have been claims that natural products simply have a placebo effect. In our study, we looked at more than 100 types of natural product combinations that are perceived to be the best and found that it is possible for natural products to achieve the same effectiveness as human-made drugs. However, the probability of finding such combinations based on traditional methods is low (below 3%) as the natural products have to be of sufficient potency and taken in the right combination.”

It’s worth challenging that caveat on at least two counts, however. Firstly, when we know that so many ‘high strength’ prescription drugs don’t work, why are we still using their potency as the benchmark for success?

Secondly, the idea that it is hard to find combinations of natural products that work therapeutically ignores the fact that the chances of a finding a synthetic drug combination that works is also very low. Between the research, development, internal testing and public trials, the entire process is lengthy – up to 12 years – and costly. It is estimated that only 1 out of every 5,000 to 10,000 drugs actually make it out into the marketplace.

Unlike many synthetic substances, many herbal products have a tradition of use that can provide the basis for further research and development and a guideline for use.

In the meantime, Prof Chen says his team, which has been involved in other studies of these herbal combinations,  will continue to conduct more research in this area, in particular, to determine how to achieve the same level of effectiveness for natural products as synthetic drugs. Their research will focus on popular herbal products and frequently prescribed traditional medicine.

Weldelia chinensis is a member of the sunflower family and known to have anti-inflammatory properties [Image: Wikimedia commons]