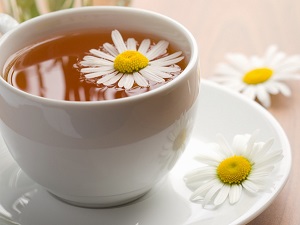 Chamomile is a commonly used herb among older adults of Mexican origin. In an effort to understand its potential benefits, researchers from the University of Texas Medical Branch at Galveston analysed data from over 1,600 women and men from over a seven-year period, during which the researchers compared consumption of chamomile and the cause of death.

Before beginning the study the team established that 14% of the participants regularly drank chamomile tea.

» Regularly drinking chamomile reduced the risk of premature death from all causes in older Mexican women – but not men.

» Chamomile contains high levels of antioxidant phenolic compounds which may contribute to its healthful effects.

Benefits for women – but not men

The findings, published in the journal Gerontology, revealed consuming chamomile lowered the risk of premature death from all causes among women by 29%. This difference was still found even after taking into account various risk factors including socioeconomic status, existing health conditions and health behaviours. The same protective effect was not found in men.

“The reason for a difference in our reported findings between Hispanic women and men is not clear, although women were shown to be more frequent users of chamomile than men,” said Bret Howrey, study author and assistant professor in the the University of Texas Medical Branch at Galveston, department of family medicine.

“This difference may be due to traditional gender roles whereby women manage the day-to-day activities of the household, including family health, and may also reflect greater reliance on folk remedies such as herbs.”

The researchers also speculate that higher rates of both smoking and alcohol consumption among men may have been influential.

One of the most common forms of herb use is as a brewed beverage. Chamomile is one of the oldest, most-widely used and well-documented medicinal plants in the world and has been recommended for a variety of healing applications.

Although it’s unclear how chamomile use is associated with decreased mortality, recent studies have shown the effectiveness of this herb when it comes to boosting health. A 2005 study published in the journal found chamomile can serve as an immunity booster. Participants who consumed five cups of chamomile tea for two weeks showed an increase level of hippurate, which is associated with the botanical phenolics that boost immunity and fight bacteria. Moreover, hippurate along with glycine – amino acid for muscle spasms – may remain in the body after quite some time after consumption. This could help explain why chamomile tea boosts the immune system and fights infections linked to colds.