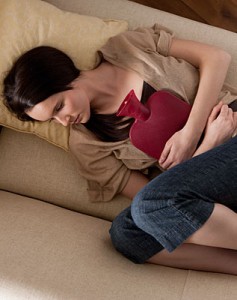 Natural Health News — If you regularly suffer from painful periods is may be time to put down the ibuprofen and try visiting an acupuncturist instead.

Painful periods or dysmenorrhoea is a common experience in women of reproductive age. It is caused by uterine muscle contractions and can occur before and during your period and result in an uncomfortable feeling of pressure in the abdomen, and pain in the hips, lower back and inner thighs. Nausea, vomiting and diarrhoea are also common symptoms and for some women the whole experience can be very debilitating.

There are two types of period pain: primary and secondary. Primary period pain is a very common condition. The pain often starts shortly before or at the start of the period and continues one to three days. Non-steroidal anti-inflammatory drugs (NSAID) known as pain killers are common used to relieve the pain.

Now two new studies have compared the effects of acupuncture to NSAID treatments for dysmenorrhoea.

One published in the European Journal of Obstetrics, Gynaecology and Reproductive Biology provided evidence that acupuncture is very effective to relieve primary period pains. The study involved in 35 young women with a diagnosis of primary dysmenorrhoea. They were divided into two groups: acupuncture group and medicine group. One month treatments were given to these women with dysmenorrhoea and then the pain scores were assessed. They found that acupuncture is as effective as NSAID to reduce period pain. While 52% of women in the medication group had decreased pain, nearly 70% of women in the acupuncture group had reduced pain.

The women received the treatments for a total of three months and were asked to evaluate their symptoms at the beginning and end of the study.

Both acupuncture groups had significantly better outcomes however, the women who received a combined treatment of acupuncture and herbal supplements experienced the best pain relief. They also had better long-term relief of symptoms compared to the electro-acupuncture only and ibuprofen groups.

Many studies have shown that acupuncture can provide significant pain relief. These findings suggest that acupuncture is just as effective, and for some may be better, than common medications for menstrual pain.