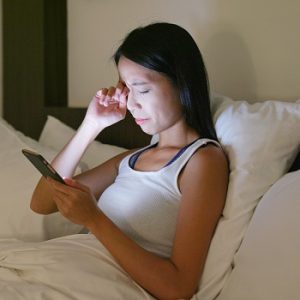 Turn it off! Nighttime exposure to light from screens and other gadgets is not healthy for body or mind! [Photo: Bigstock]

Stay in sync with your body clock for better mental health

Natural Health News — Keeping to a normal daily rhythm – being active during the day and sleeping at night – can have benefits for mental as well as physical health and well-being.

A new UK study has found that staying in sync with natural circadian rhythms – our daily sleep-wake and light-dark cycles – is linked to improvements in mood and cognitive functioning as well as a decreased likelihood of developing major depression and bipolar disorder.

Our internal body clock regulates multiple functions including body temperature and eating habits. Disruption of this clock, for instance through long-term night-shift work, has previously been associated with an increased risk of cancer, heart disease and obesity.

The observational study of over 91,000 people, aged 37 to 73, was conducted at the University of Glasgow and published in The Lancet Psychiatry.  It measured disruptions in sleep-wake cycles using a device called an accelerometer that is worn on the wrist and measures a person’s daily activity levels. Moods and mental well-being were measured using a standardised questionnaire.

» A large British study has linked staying in sync with natural circadian rhythms – our daily sleep-wake and light-dark cycles – to improvements in mood and cognitive functioning.

» Being very active and exposed to light in the day and less so at night, and doing simple things like turning off electronic devices at night could help improve mental well-being.

Those with more circadian rhythm disruptions – defined as increased activity at night, decreased activity during the day or both – were significantly more likely to have symptoms consistent with bipolar disorder or major depression. They were also more likely to have decreased feelings of well-being and to have reduced cognitive functioning, based on a computer-generated reaction time test.

Lead researcher Professor Daniel Smith, professor of psychiatry at the university, noted: “It’s widely known that a good night’s sleep is a good thing for well-being and health. That’s not a big surprise. But I think what’s less well-known and what comes out of this work is that not only is a good night’s sleep important, but having a regular rhythm of being active in daylight and inactive in darkness over time is important for mental well-being.”

However, findings from this study – the largest of its kind so far – are consistent with research indicating a link between sleep disruptions and mood disorders. Another British study in, for example, showed that men who worked night shifts for four years or more were more likely to have anxiety and depression than those who work during the day.

There is also evidence that the body clocks of people who suffer from depression are ‘out of sync’.

He adds that better sleep hygiene is key. ‘There are a lot of things people can do, especially during the winter, such as getting out of the house in the morning to get exposed to light and take exercise, so that by evening they are tired.

‘You can also turn off your mobile phone around 10pm because the light in it is telling your brain it’s daytime. But it is hard for some people, such as shift workers, because of their job or because of their family circumstances.’

Again this advice links to recent findings that taking a more mindful approach to using our phones, computers and tablets can make us happier.

Turn it off! Nighttime exposure to light from screens and other gadgets is not healthy for body or mind! [Photo: Bigstock]