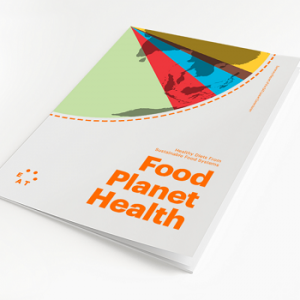 Can we eat to save the world?

2019 has begun with questions about food. How will we eat in the future? What is the healthiest diet for people and planet? And who do we trust to decide this for us?

These questions took centre stage over the last week as a new report, Food in the Anthropocene, was published.

The report, compiled over 3 years by the EAT-Lancet Commission and involving an international panel of scientists and academics, is mostly an analysis of existing studies and its broad brush conclusion is that we need to change the way we eat for a variety of reasons, including better human health and addressing agriculture’s contribution to climate change.

From this data the authors have put together a ‘reference diet’, which attempts to show how we can all can get the nutrients we need from a mostly vegetarian, or preferably vegan, diet. The report also suggests we tackle food waste and water waste and preserve planetary biodiversity.

In short, it covers all the kumbaya concepts and as such it’s not really much to shout about – and yet from the moment the report was released the shouting began.

In truth there are multiple troubling aspects to the report (too many to cover here) which deserve further inspection.

Glaring omissions
In common with many similar reports, it paid only lip service to where food comes from and the need to localise diets according to geography and culture. Indeed many stats about livestock’s contribution to global warming come from American factory farms and don’t necessarily apply to countries where grazing is more common.

So, too, are the high amount of pesticides used in producing crops. A recent Europe-wide survey of soil, for instance, found pesticide residues in 83% agricultural soil samples, in 166 different pesticide combinations. This cocktail of pesticides is what we are currently growing our food in – and, the report notes, is likely an underestimation of the problem.

The EAT reference diet also contains more calories each day from unsustainable palm oil than from eggs or fish and excludes animal fats, unless there happen to be any in the 7g of beef or pork you are allowed daily. The report does not address fully the problem of processed foods, preservatives or added salt either.

It also advises that vegans may require supplements, raising legitimate questions about whether this is really a complete, healthy diet.

A bigger agenda
The report was funded primarily by the UK’s Wellcome Trust. Wellcome partnered with Norwegian thinktank EAT, the Stockholm Resilience Centre and Norway’s Stordalen Foundation (run by multibillionaire and radical vegan, Grunhild Stordalen) to produce the document. EAT, which led the group, has some very deep and worrying ties with conventional food companies looking to capitalise on the confusion over what we should all eat. It also has a strong vegan/vegetarian agenda.

Food in the Anthropocene is just a small refrain in the longer song of EAT’s activities.

One initiative, FReSH, works with companies like Bayer, Cargill, Syngenta, Unilever, DuPont, Nestle and PepsiCo, among, others to transform how we eat and ‘create’ better food. Another, FOLU (note the love of vague acronyms) aims to “go deep into the policy, regulatory environment, and businesses of individual countries” (starting with unstable countries – and therefore soft targets – like Colombia, Indonesia and Ethiopia).

Desire + fear = marketing opportunities
We all want a sustainable world, and we all fear that we won’t get one. Where there is desire and fear there is always somebody willing to capitalise on it for profit. In a global economy too often that means trying to force global solutions and magic bullets – and singing the same old songs about how there are no limits to what we can do.

That is 100% sustaina-BULL. True sustainability is all about limits. It’s also about boundaries that can’t be crossed; it’s as much about what we can’t have as it is about what we can. It’s about working with local needs, culture and geography to find local sustainable solutions.

There are also uncomfortable parallels between the eat-to-save-the-world and shop-to-save-the-world mantras. While the food system contributes to several global problems, there is a limit to what it can do to ‘fix’ these problems and a limit, also, to how often we can keep putting the responsibility back on to consumers. The over-focus on food, for instance, lets the worst offender, the fossil fuel industry, completely off the hook.

If we allow the sustainability agenda to continue to be hijacked by vested interests, special interest groups, billionaire thinktanks and large corporations, true sustainability will never be within our grasp – and the consequences for us all will be devastating.