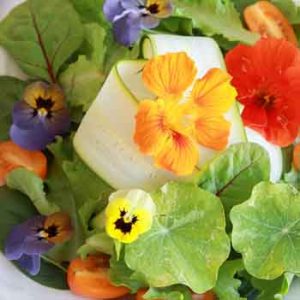 Natural Health News — Edible flowers provide new colours, textures and vibrancy to any dish, and apart from the “glam” factor, they can constitute new sources of bioactive compounds, according to Portuguese researchers.

In Medieval France, the flowers of calendula (Calendula officinalis L.) were used to prepare omelettes but also salads or as an accompaniment cheese. In Mexico, Dahlia flowers are commonly consumed in different type of dishes, for example in dried soups.

Today, according to researchers from the Polytechnic Institute of Bragança in Portugal edible flowers represent “an unexplored niche market with great economic and social importance being used since ancient times in culinary preparations, such as sauces, liquors, salads and desserts, and also in the preparation of hot beverages (tisane and infusion), mainly in European countries, due to their medicinal properties.”

» Flowers have a long use in cooking, adding colour and flavour to a variety of dishes.

» A new study by Portuguese researchers suggest they may also be rich sources of extra nutrients.

» In this study, calendula flowers were the richest source of carbohydrates, protein ash and healthy fats, followed by rose and dahlia flowers.

The researchers selected edible petals and infusions of dahlia, rose, centaurea (knapweed) and calendula – commonly known as marigolds and already used by the nutrition industry as a source of carotenoids.

They analysed the macronutrient composition, energetic value, fatty acids, soluble sugars, organic acids and tocopherols of the petals, which was then compared to the nutritional composition of their infusions.

Carbohydrates were the most abundant macronutrients, followed by proteins and ash. Fructose, glucose and sucrose were identified in all the petals and infusions

The  highest values of total proteins, soluble sugars and organic acids were found in rose petals.

The researchers then made infusions from all the flowers and analyzed these. Dahlia and rose showed the highest content in carbohydrates and rose the highest energetic contribution.

“These results demonstrate that edible petals can be consumed in a daily diet as a nutrient source, and could also be used to prepare infusions to be consumed worldwide,” the researchers said.

Results from these and other studies suggest that some of the distinctions we make between food and not food may be arbitrary and may mean we are missing out on some extra nutritional benefits.