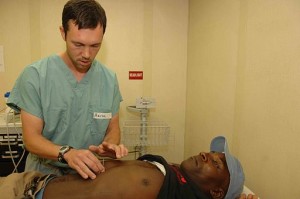 US military turns to acupuncture to treat injured soldiers

Natural Health News — The US military is increasingly using acupuncture as a complementary therapy to help alleviate the physical and emotional injuries suffered by soldiers.

The current issue of the peer reviewed journal Medical Acupuncture is devoted entirely to the use of acupuncture in the military.

Editor-in-Chief, Colonel (Ret.) US Navy, Richard Niemtzow, MD, PhD, MPH, has been at the forefront of efforts to adopt battlefield acupuncture and has demonstrated its effectiveness in pain control.

He writes: “The expanded use of acupuncture on the battlefield is being met with enthusiasm from physicians and patients because it works. Acupuncture may be used as a primary modality or as an adjunct to Western medicine. In either case, it is changing the face of military medicine as a force multiplier.”

The journal examines, amongst other issues, the history and current status of the use of acupuncture in the US military for instance to treat both the physical and psychological manifestations of PTSD as well as back pain, headache, insomnia and traumatic injuries and also considers next steps for its wider integration into military medial care.

The general conclusion is that acupuncture is producing health benefits for soldiers and more funding must be directed into quality research. But clearly, any lack of research thus far has not stopped the US military from integrating acupuncture into its medical care.

Writing about the next steps for acupuncture in the military, Anita H. Hickey, MD, Capt, US Navy Department of Anesthesiology, Naval Medical Center San Diego, says:

“Barriers to access to these services include: poor education of physicians and medical executives in the evidence relating to acupuncture; preconceived ideas concerning the role of complementary and alternative therapies in health care; and lack of acceptance of acupuncture as a Tricare Benefit.”

Recently, the Wall Street Journal featured an article on the growing success of medical acupuncture to treat mild cases of traumatic brain injury, one of the most common types of injuries affecting US soldiers.

The article describes the Navy’s use of acupuncture-inserting needles at key targets in the head, ears, hands, and feet-to relieve symptoms such as sleeplessness, memory problems, anxiety, headache, and irritability that often follow an injury to the brain.