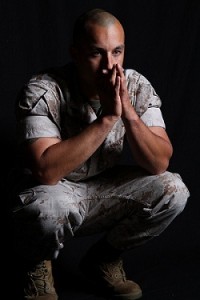 The study, led by the Scripps Center for Integrative Medicine in San Diego, California, involved 123 returning active-duty Marines at Camp Pendleton, California from July 2008 to August 2010.

To be eligible for the trial, participants were screened to confirm that they were currently experiencing at least one of the following PTSD symptoms: re-experiencing of trauma via flashbacks, nightmares, intrusive thoughts, exaggerated emotional responses to trauma, emotional numbness, insomnia, irritability, exaggerated startle response or avoidance of people or places that remind them of the trauma.

Writing in the journal Military Medicine the researcher say they found that patients receiving these complementary medicine interventions showed significant improvement in quality of life, as well as reduced depression and cynicism when compared to soldiers receiving treatment as usual alone.

To study the effects of guided imagery and healing touch the participating soldiers were separated at random into two groups, one that received treatment as usual for PTSD and another that received usual treatment as well as healing touch – a practitioner-based treatment aimed at eliciting the participant’s own healing response – alongside guided imagery – a self-care therapy aimed at eliciting relaxation as well as enhancing trust and self-esteem.

Healing touch (also called therapeutic touch or Reiki) is an energy-based, non-invasive treatment that restores and balances the human energy field to help decrease pain and promote healing. It is often used as an adjunct to surgery and other medical procedures to assist in pain reduction, decrease anxiety and elicit relaxation.

Guided imagery is a way of using the imagination to help a person, reduce stress, decrease pain and enhance overall well-being through visualisation.

For the purposes of this study, guided imagery was administered to the subjects through a recorded CD simultaneously with healing touch and then listed to independently by subjects at least once daily.

After six sessions within a three-week period the combined complementary therapy group reported a significant improvement in PTSD symptoms.

“Scores for PTSD symptoms decreased substantially, about 14 points and below the clinical cutoffs for PTSD,” said Dr. Mimi Guarneri co author and co-founder of the Scripps Center for Integrative Medicine. “This indicates that the intervention was not just statistically significant, but actually decreased symptoms below the threshold for PTSD diagnosis. It made a large difference in reducing PTSD symptoms.”

“Service members are seeking out non-drug complementary and integrative medicine as part of their overall care and approach to wellness,” said Wayne B Jonas, MD, president and chief executive officer of Samueli Institute of Alexandria,Virginia which conducted a blind analysis of the study data.

“This treatment pairs deep relaxation with a self-care approach that can be used at home. The results of this study underscore the need to make effective, non-stigmatising treatments for PTSD available to all our service members.”