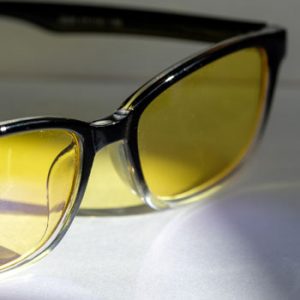 Amber-tinted glasses are a simple way to block out the blue light from phones and computers that keeps us awake at night. [Photo: Bigstock]

Natural Health News — How do you unwind before bedtime? If your answer involves Facebook and Netflix, you are actively reducing your chance of a good night’s sleep.

And you are not alone: 90% of us use light-emitting electronic devices, such as smartphones and laptops, in the hour before bed, despite the fact that such behaviour is associated with symptoms of insomnia. The obvious solution is to ditch the technology, but people rarely heed this advice.

Knowing that individuals with insomnia are also unlikely to change their ways, researchers from Columbia University Medical Center tested a method to reduce the adverse effects of evening ambient light exposure, while still allowing use of blue light-emitting devices. Their findings will be published in the January issue of Journal of Psychiatric Research.

Smartphones, tablets and other light-emitting devices are lit by LEDs, which have a peak wavelength in the blue portion of the spectrum. Blue light at night suppresses melatonin and increases alertness; the use of amber-tinted lenses that block blue light mitigates these effects.

The Columbia team, led by Ari Shechter, PhD, assistant professor of medical sciences, reasoned that selectively blocking blue light in the hours before bedtime would lead to improved sleep in individuals with insomnia.

» Exposure to blue light late at night, from phones and computers, could be causing an epidemic of insomnia.

» In a small study, researchers tested the benefits of amber-tinted glasses that help block blue light emitted by phones and computers to see if it improved sleep.

» Results showed that participants got around 30 minutes extra sleep when they wore the amber lenses compared to the clear lenses.

To test their theory, the researchers recruited 14 individuals with an insomnia diagnosis to take part in a small study. For seven consecutive nights, participants wore wrap-around frames with amber-tinted lenses that blocked blue light or with clear placebo lenses for two hours before bedtime. Four weeks later, participants repeated the protocol with the other set of glasses.

The researchers found that participants got around 30 minutes extra sleep when they wore the amber lenses compared to the clear lenses. In self-reported sleep surveys, participants also reported greater duration, quality, and soundness of sleep, and an overall reduction in insomnia severity.

These findings are consistent with prior studies showing a benefit of blue-light-blocking lenses in improving sleep, but should be replicated in larger controlled studies, Shechter said.

“Now more than ever we are exposing ourselves to high amounts of blue light before bedtime, which may contribute to or exacerbate sleep problems,” Shechter said. “Amber lenses are affordable and they can easily be combined with other established cognitive and behavioural techniques for insomnia management.”

Many smartphones screens can now be adjusted to emit amber instead of blue light, and Shechter said these settings should help to improve sleep. “I do recommend using the amber setting on smartphones at night, in addition to manually reducing the brightness levels. But blue light does not only come from our phones. It is emitted from televisions, computers, and importantly, from many light bulbs and other LED light sources that are increasingly used in our homes because they are energy-efficient and cost-effective,” he said.

“The glasses approach allows us to filter out blue-wavelength light from all these sources, which might be particularly useful for individuals with sleep difficulties.”

The use of amber lenses also appeared to reduce blood pressure in the study’s participants (these data are published in the September issue of Sleep Medicine). “Insomnia is often characterized by physiologic hyperarousal, which may account for the relationship between poor sleep and cardiovascular risk,” Dr Shechter explained. “Going forward, it will be interesting to examine whether this blue-light blocking approach can be useful for improving cardiovascular outcomes like hypertension in individuals with poor sleep.”

Amber-tinted glasses are a simple way to block out the blue light from phones and computers that keeps us awake at night. [Photo: Bigstock]