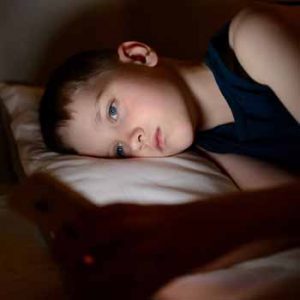 More evidence that spending time in the dark is the best way to ensure you wake up refreshed and restored. [Photo: Bigstock]

Are we sleep-deprived or just darkness-deprived?

The Centers for Disease Control and Prevention (CDC) state that insufficient sleep is a serious public health concern, because it can lead to many immediate dangers such as car crashes as well as long-term health problems like diabetes.

The blame for sleep deprivation is often pinned on our fast-paced, 24/7 lifestyle, made possible by electric lighting at all times of day and night.

But are we really getting too little sleep?

A new study challenges that idea from a unique perspective, and it is getting wide media attention.

Researchers, led by Jerome Siegel at UCLA, followed three small preindustrial societies, two in Africa and one in South America, reasoning that the best way to judge whether sleep habits in the industrialized world are unnatural is to compare them to sleep habits in those few remaining societies on Earth that still live without electricity.

» New research challenges the idea that the quantity of our sleep – the number of hours we get per night – is the best way to tell if we are getting adequate sleep.

» In the industrialised world we sleep about as many hours per night as those in less developed countries, but our sleep quality is poorer and this, in turn, is deeply affected by patterns of light and darkness.

» They key to waking refreshed, say these scientists is ensuring an adequate number of dark hours per night – a challenge in a world that is lit up 24/7.

They found that the average period of time people spent trying to sleep was 7-8½ hours each night. Of this, only 5½-7 hours was confirmed as time asleep. This is about the same as, or less than, what is reported by most Americans and Europeans, and is considered too little for optimum health.

So maybe 5½-7 hours of sleep is natural and not the problem the CDC and many other health organizations say it is.

However, a crucial aspect of the findings of the new study has not been discussed in either the news stories or the paper itself: people in preindustrial societies spend much more time in darkness than people living in the industrialized world.

What does this study tell us about sleep patterns?

Besides finding that people in preindustrial societies without electricity sleep about the same amount as people in the electrified world, researchers also found that sleep didn’t start until several hours after sunset, although almost everyone woke up close to sunrise.

The researchers also found sleep in these societies was usually interspersed with periods of awakening that lasted for over an hour. These routine awakenings call into question the conventional wisdom that “ideal” sleep should be compacted into one stretch. Waking for a while at night is not necessarily a sleep disorder. Compacted sleep (“sleeping like a log”) is evidently not the way in which sleep evolved in humans.

But the big difference between sleep in the industrial world and sleep in the preindustrial world is about light and darkness. Electric light can delay or shut down nighttime physiology, whereas light from a wood fire or flame cannot. The researchers did not directly assess the quality of sleep, and this may be the part that matters.

We humans have an endogenous circadian rhythmicity in physiology that is adapted to the solar cycle of day and night (as does almost all life on the planet). This means that in constant darkness we would still cycle about 24 hours in body temperature, hunger, activity and sleep.

When the sun is up, we are in daytime physiology: alert, active and hungry. When the sun sets in the evening, we begin the transition to nighttime physiology: body temperature drops, metabolism slows and sleepiness builds. In the world before electricity, each lasted about 11 hours near the equator, with time also for the transitions from one to the other at dawn and dusk. Of course, farther from the equator, the length of night increases or decreases according to season.

Part of nighttime physiology is sleep, but it is difficult to define what “normal” sleep is. Until the late 20th century, sleep was ignored by most biologists because it’s hard to study, and was thought by many ambitious people to be a vast waste of time. In recent years, this attitude has changed radically. It is now believed that modern life has led to unhealthy sleep habits and widespread sleep deprivation with a multitude of adverse health and productivity consequences.

Looking at sleep in the industrialised world

In 1991, Thomas Wehr, a prominent sleep researcher, published the results of a landmark experiment he conducted in Bethesda, Maryland. In a sense, it mimicked sleep in the preindustrial world where there are naturally long, dark nights – the environment studied directly by Siegel and colleagues.

First, seven volunteers spent eight hours in the dark at night in the laboratory for four weeks; they then switched to 14 hours of dark each night without access to clocks and alarms. During the short nights, they slept a little more than seven hours on average. During the long nights they slept only about an hour more, a little over eight hours, and the sleep was broken into two stretches with an hour or two awake in between.

Importantly, the duration of melatonin production increased by about two hours after the long night. The hormone melatonin is a marker of nighttime physiology that helps regulate sleep and wake patterns. It has many important biological functions, and its production requires dark but not sleep.

So whether awake or not, these subjects produced melatonin, and maintained nighttime physiology, for the long duration of dark. But this is not how people actually live in the modern world. People use electric lights and electronic gadgets in the evening, and often late into the night.

The type of light we use at night matters

In industrial societies, people are bathed in blue light from smartphones, computers and some kinds of light bulbs all day, and for a good chunk of the night. Our preindustrial counterparts may stay up late too, but it’s in the dark or in the light of a flame.

In the preindustrial time before electricity, sleep occurred within a much longer period of circadian dark; in the modern world it does not. Dark is restricted only to the sleep period, if even then; many people do not sleep in a truly dark bedroom. Seven hours of sleep embedded within 11 hours of circadian dark may be far more restorative than seven hours with bright, blue-containing light preceding it in the evening. The Siegel study might suggest that preindustrial people don’t sleep any more than people in industrialized societies, but perhaps they just get a better night’s sleep, and much more circadian dark.

For us in the industrialized world, it might be wise to use dimmer, longer wavelength lighting (like low wattage incandescent bulbs, if you can still find them) in the evening before sleep to allow an earlier transition to nighttime physiology. Fortunately, such circadian-friendly lighting is currently being designed with the new lighting technologies now available.

And during those inevitable periods of awakening in the middle of the night, try to enjoy the calm of darkness.

More evidence that spending time in the dark is the best way to ensure you wake up refreshed and restored. [Photo: Bigstock]