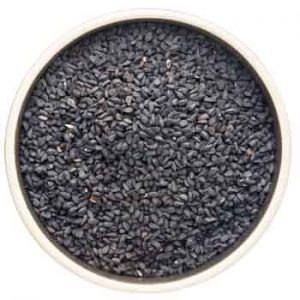 The first received a daily dose of cold-pressed black cumin seed oil, honey  and water in a ratio of 1:1:1. The placebo was mineral oil mixed with honey and water in the same ratio. To give comparable colour and taste to the placebo, minute amounts of chlorophyll and red chili pepper fruit extract was added to the mineral oil.

All patients were also taking the drug famotidine, which inhibits stomach acid production.

» Black seed has been a mainstay of traditional Persian medicine for more than 1000 years. It is used to treat a wide variety of conditions. Honey likewise has a long history of use and both are traditionally used to calm upset stomachs.

» In a recent study a daily mixture of equal parts black seed, honey and water produced rapid improvements in dyspepsia and also helped to reduce the degree of H. pylori infection

» The researchers suggest anti-inflammatory and antioxidant properties in the mixture may be behind its beneficial action.

Black seed (Nigella sativa) oil is a traditional Persian medicine used for over 1000 years as a remedy for many ailments. In animal studies it has been shown to have gastroprotective properties as well as antibacterial activity against clinical Helicobacter pylori infections.

Although dyspepsia symptoms improved in both groups by the 8 week mark, the decreases in symptoms assessed  at 2, 4 and 8 weeks were significantly greater in the treatment group compared to placebo. The improvements were across the board; there were no significant differences in benefits between men and women, nor did improvement differ according to the person’s age.

Adverse effects were mostly minor and included, in both groups, included nausea and bloating, and in the treatment group, a burning sensation.

Overall the mixture of black cumin seed oil and honey was shown to be a safe and effective treatment of dyspepsia and H. pylori infection.

The researchers speculate on several different actions including antioxidant and anti-inflammatory benefits, and a reduction in acid secretion over and above that from the medication.

They suggest that larger well-designed studies of longer duration would help to confirm these findings.