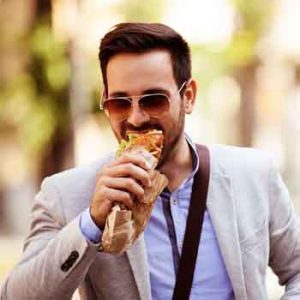 Standing up while eating is unlikely to give you indigestion and may even have some benefits. [Photo: Bigstock]

Eating standing up – is it really bad for you?

These days, many of us are flooded with advice on what to eat, when to eat and how much to eat. Alongside this calorie and nutrient-based advice you may even have heard that you should avoid eating while standing up or lying down, as was common in Ancient Greece or Rome.

It may seem to make sense, but how much scientific evidence is there to back this advice?

If we consider these three eating positions: lying down, sitting and standing, what challenges do they present the body with and which should we choose as our standard eating position?

The first of these positions, eating lying down, was fashionable to the ancients. This may not solely have been through laziness or a show of wealth and power – as some researchers have suggested, lying down on your left side reduces the pressure on the antrum or lower portion of the stomach, thus relieving discomfort during a feast. As few of us truly feast nowadays – at least in the Roman sense – this might not be so important.

» Over the years, most of us have been advised that eating standing up will give us indigestion.

» Amazingly there is some science to guide us on how different positions – lying down, standup up or sitting up – affect digestion.

» Generally speaking, what you eat, and how you eat it, is more influential than the position you eat it in.

Looking at the evidence

There is some evidence that we absorb carbohydrates at a slower rate when eating lying down compared to sitting, and this is likely due to the rate of gastric emptying. Slower absorption of carbohydrates is generally considered to be healthy as it avoids large spikes in insulin.

Alternatively, eating lying down may increase the risk of developing gastroesophageal reflux disease (GORD), a condition where the stomach’s contents return back up into the oesophagus through the cardiac or oesophageal sphincter, a ring of muscle that controls the passage of food from the throat to the stomach. This condition is found with increasing prevalence worldwide, and can cause significant discomfort, often being mistaken for a heart attack.

Although there is almost no published research specifically investigating the effect of eating lying down on the symptoms of GORD, the American College of Gastroenterology advises avoiding lying down for two hours after eating, which would suggest that eating lying down itself is probably unwise. As GORD slightly increases the risk of developing more serious conditions including Barrett’s oesophagus and oesophageal cancer, this is probably bad news for those of us who want to adopt the Roman banqueting lifestyle.

Whether we sit down or stand up for a range of activities throughout the day is a topical issue. Sitting down, which alongside lying down makes up our sedentary behaviour, is increasingly linked to poor health, although there is some contention around this. But when it comes to eating our meals, it seems for once sitting down might be the preferable choice. People might be more likely to take their time over a meal if seated, although this has not been seriously studied. Eating more slowly is considered to be healthy as it more rapidly increases fullness and decreases appetite, leading to a potential reduction in calorie intake.

As for eating while standing up, there is no real evidence that it has any negative effects on digestion and it isn’t included on any lists of prohibited activity by healthcare professionals. Although gravity isn’t needed for most of the function of the gut, it does help with preventing GORD, which is why many sufferers raise the head of their bed at night.

Standing during eating does have the benefit of promoting more energy expenditure, with estimates of around 50 extra calories an hour burned by standing compared with sitting down. Over an extended period this would add up.

So is it better to eat sitting, standing or lying down? While there is not enough scientific evidence to confidently state that eating in either position is more appropriate, it’s likely that as long as you take your time and eat mindfully, either standing or sitting to eat your meals should be absolutely fine and a healthier alternative to eating lying down.

Standing up while eating is unlikely to give you indigestion and may even have some benefits. [Photo: Bigstock]