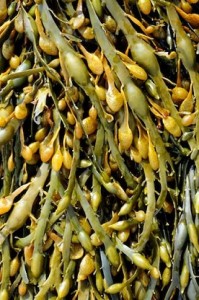 Natural Health News — Supplementing with seaweed could help reduce levels of iodine deficiency in the UK, according to a new study.

There is growing concern that subclinical iodine deficiency may be emerging in many post-industrial countries and recent studies have suggested iodine deficiency is becoming a problem in the UK. One reason for this is our increasingly low intakes of iodine-rich foods such as dairy and seafood.

Iodine deficiency is one of the main causes of an underactive thyroid, and is known to result in feelings of being run-down and lacking in energy. The condition has also been blamed for causing weight gain, aching muscles and brittle fingernails.

The new Glasgow University study, published in the British Journal of Nutrition, involved 42 healthy women of childbearing age, self-reporting low dietary consumption of dairy products and seafood, with no history of thyroid or gastrointestinal disease.

The women were asked to take a seaweed supplement over a period of two weeks.

Before the trial the researchers determined that the iodine consumption amongst the participants was far lower than the daily minimum recommended intake of 140 micrograms (mcg) – and more than half of the group were found to be iodine insufficient.

At the end of the trial the group with low iodine levels showed a significant rise from 93 mcg of chemical present in their systems to each day to 262 mcg per day.

There was no change in other thyroid hormone levels after supplementation. The seaweed was palatable and acceptable to consumers as a whole food or as an ingredient, and effective as a source of iodine in an insufficiency population.

Iodine obtained from seaweed is a natural whole food, unlike potassium iodine supplements, and inaddition provides the body with all of the micronutrients necessary for the proper metabolism of iodine such as selenium, zinc, iron and vitamins A and E.

The Scottosh research also revealed that whilst the potassium iodine entered the bloodstream very quickly and was as rapidly depleted, the Seagreens iodine remained in the system significantly longer, enabling the body to make use of the available iodine.

When buying seaweed supplements, it’s important to scrutinise the ingredients list. Many have high levels of fillers, additives and preservatives. Seagreens can be found in quality supplements.