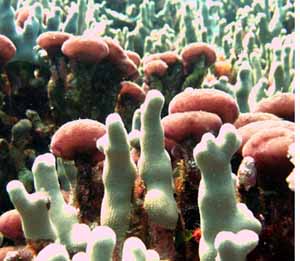 In the ocean, just like in the garden, not all 'pests' are bad news

Nuisance seaweed could be a boon to human health

Natural Health News — A seaweed found growing off the coast of Hawaii produce substances that could one day treat bacterial infections and chronic inflammatory conditions such as arthritis, it’s claimed today

The seaweed is considered a nuisance because although it is native to Hawaii it has been blooming out of control in recent years and is a threat to the healthy growth of coral reefs.

But scientists at the University of California San Diego say that the seaweed, a tiny photosynthetic organism known as a “cyanobacterium”, produces chemical compounds that exhibit promise as anti-inflammatory agents and in combating bacterial infections. The study is published in the journal Chemistry & Biology.

“In different arenas these compounds could be helpful, such as treating chronic inflammatory conditions for which we currently don’t have really good medicines,” said lead researchers William Gerwick.

Scientists identified the “nuisance” organism in 2008 on the reefs directly adjacent to the National Park Pu’uhonua o H’onaunau off the Kona coast of Hawaii. The cyanobacterium is believed to be native to Hawaii and is usually inconspicuous.

“When we first found the bloom during routine surveys with the University of Hawaii we were concerned as it was clearly smothering the corals at one of the most popular dive sites in Hawaii,” said co researcher said Jennifer Smith. “Observations in the field even suggested that the cyanobacteria may have been releasing some chemical that was causing the coral to bleach.”

Not just a pest

Samples of the seaweed were collected in 2009 and ongoing analysis of their properties showed that the seaweed (the cyanobacterium Leptolyngbya crossbyana) generates natural products known as honaucins with potent anti-inflammation and bacteria-controlling properties.

Specifically, the substances hamper bacteria’s ability to “swarm” over surfaces. For example, when overtaking a new area, bacteria secrete small amounts of a substance known as a quorum sensing factor, which tests to see if the new surface is safe for colonisation. Halting a quorum sensing factor could one day translate to a treatment for bacterial infections.

This ability could translate into treatments for bacterial infections, acne and other skin conditions

Sounding more like an organic farmer than a scientists Gerwick said “I think this finding is a nice illustration of how we need to look more deeply in our environment because even nuisance pests, as it turns out, are not just pests”.

“These organisms have been on the planet for millions of years and so it is not surprising that they have evolved numerous strategies for competing with neighbouring species, including chemical warfare,” added Smith. “Several species of cyanobacteria and algae are known to produce novel compounds, many that have promising use in drug development for human and other uses.”

Both scientists caution, however, that it is a long road from understanding properties of the seaweed to producing drugs or supplements from it.

In the ocean, just like in the garden, not all 'pests' are bad news