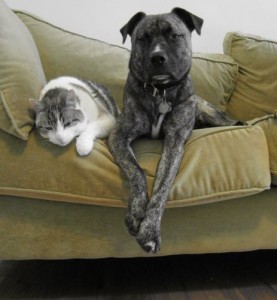 They are your best friends. Early pet exposure means fewer allergies for kids.

A mix of factors including prenatal pet exposure, a mother’s delivery mode and race may hold the key to a child’s risk of developing allergies by age 2, according to new research.

In a study believed to be the first of its kind, published in the  Journal of Allergy and Clinical Immunology, babies who have indoor prenatal pet exposure have a pattern of lower levels of the antibody known as Immunoglobulin E, or IgE, between birth and age 2. IgE is linked to the development of allergies and asthma.

But it’s not just exposure to pets that was influential. How a child is born, and its racial inheritance, is also important.

Other research has shown that pet exposure has a protective effect against early allergy development. The data on mode of birth, say the researchers, reinforce the notion that babies born through the birth canal are exposed to a higher and more diverse burden of bacteria, further boosting the immune system’s protection against allergies. “Genetic variants” related to race may provide the key to why some infants are more vulnerable to allergies than others.

The findings support the so-called hygiene hypothesis, which theorizes that early childhood exposure to infectious agents affects the immune system’s development and onset of allergies and asthma.

They are your best friends. Early pet exposure means fewer allergies for kids.