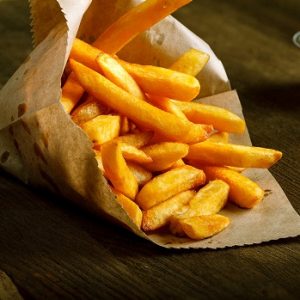 The type of oil you use, and how fresh it is, does make a difference to the nutrients in fried potatoes. [Photo: Bigstock]

Can you make that side of chips healthier?

Next time you order chips in a restaurant, you might want to ask the owner what type of oil they use and how fresh it is.

Most establishments prefer mono-unsaturated vegetable oils for frying potatoes – but what effect does the oil have on both the nutrient levels and the levels of toxic acrylamide in fried potatoes?

The answer, it seems, depends on how long a particular batch of oil has been in the fryer.

New research has revealed that whether the frying oil being used is ‘fresh’, or has been previously re-used and re-heated, impacts not only on the qualities of the oil itself, but also the nutrients in the potatoes – something that previous research has failed to take into account, says a group of Portuguese and Spanish scientists.

They therefore set out to see how much of a difference fresh versus old oil made by frying potatoes in either extra virgin olive oil, canola or peanut oil that had been in the fryer for different lengths of time.

In order to replicate conditions used for commercial frying, the scientists heated the oils for 8 hours a day and then left them to cool for 16 hours, with frying cycles every 30 minutes. Potatoes were cut into chips (1 × 1 × 4 cm) and fried for six minutes each time.

Publishing their findings in the journal Food Chemistry​, they noted differences between each oil for various nutrients, but in general using fresher oil was associated with greater nutrient preservation. Fresh oil was also best at reducing toxic acrylamide, regardless of oil type.

From a nutritional point of view, canola oil was more balanced, with what the researchers call “interesting amounts” of essential fatty acids and vitamin E, which remained “superior” during all the frying sessions, they write.

Potatoes fried in the fresh batch of oil had similar acrylamide levels regardless of oil type, and these were also the lowest levels recorded.

The highest acrylamide levels were observed with fried potatoes in 16 hour old in peanut oil, closely followed by canola oil at 16 hours and 28 hours or extra virgin olive oil at 24 hours old.

So there you have it. While a steady diet of fried foods is just plain unhealthy, the occasional side of chips is unlikely to cause harm. But the take home message is perhaps that it is better to make them yourself, at home, where you can make sure the oil you use is fresh.

Eating out is much more of a lottery since you have much less control over the type and freshness of the oil used. We’d be interested to hear the results of any conversations about how ‘fresh’ the oil is in your local chip shop!

The type of oil you use, and how fresh it is, does make a difference to the nutrients in fried potatoes. [Photo: Bigstock]