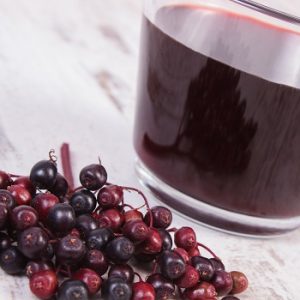 All parts of the elder tree can be used medicinally, though the berries are the most popular. [Photo: Bigstock]

In many parts of the world early autumn sees trees in the hedgerows hang heavy with deeply coloured elderberries.

There are several species of elder, but Sambucus nigra, or European elder (also called black elder), is the one used most often for medicinal purposes.

The tree, which is common throughout Europe, North America and Asia, was once regarded as a complete medicine chest. All parts of the plant can be used medicinally, however in today’s kitchen it is the fruits and flowers which are most commonly consumed.

Such is the plant’s repute that elderberries are fast becoming accepted a functional food, especially in parts of Europe such as Austria, Germany and the UK where it is gradually being incorporated into more foods and supplements.

The elder (Sambucus nigra) belongs to the same broad family of fruiting trees as blackcurrants. In folk medicine, the berries have been used for their diaphoretic (promotes sweating), laxative and diuretic properties and to treat various illnesses such as stomach ache, sinus congestion, constipation, diarrhoea, sore throat, common cold, and rheumatism.

The flowers are said to have diaphoretic, anti-catarrhal, expectorant, circulatory stimulant, diuretic, and topical anti-inflammatory actions.

The leaves and inner bark have also been used for their purgative, emetic, diuretic, laxative, topical emollient, expectorant, and diaphoretic action.

Some of these uses seem justified since elderberry contains tannins and viburnic acid, both known to have a positive effect on diarrhoea, nasal congestion, and to improve respiration.

Ancient belief has been borne out by recent research. Elderberries contain concentrated amounts of Vitamin C and beta carotene, flavonoids, fruit acids, and antioxidant polyphenols, flavonoids and anthocyanins. Levels of these nutrients are comparable and in some cases exceed those found in blueberries and strawberries, and research suggests these are better absorbed than those from blackcurrants

It is believed that the anthocyanins in elderberries enhance immune function by boosting the production of cytokines, proteins acting as messengers in the immune system to help regulate immune response.

Evidence shows that elderberries contain potent antiviral compounds as well as high amounts of bioflavonoids and that extracts of the fruit can help fight the flu. The extract is most often taken as a syrup and elderberry syrup is a widely researched and proven way to boost immunity at any time but especially against colds and flu.

Tested in the lab, elderberry syrup worked better than echinacea-containing formulations to stimulate a healthy immune response by increasing inflammatory and anti-inflammatory reactions.

Research proves it to be effective in shortening the duration and lessening symptoms of influenza A and B. A double-blind placebo-controlled trial conducted during an outbreak of influenza B Panama found that within two days there were significant improvements in symptoms, including fever, among 93.3% of those taking an elderberry syrup. A complete cure was achieved within 2 to 3 days in nearly 90% of the elderberry group compared to 6 days in the placebo group.

Likewise, research from Norway, found that flu symptoms disappeared four days faster in patients given Sambucol. On average, patients taking it recovered in 4 days earlier compared to those given placebo.

Elderberry syrup works in a very specific way. A virus enters cells by puncturing their walls with tiny spikes that cover its surface. The active ingredients in elderberry bind to and cover the spikes, preventing them from piercing the cell membrane. The viral spikes are also covered with an enzyme that the virus uses to break down the cell wall. Elderberries have high concentrations of bioflavonoids, which appear to inhibit the action of this enzyme.

For this reason the elderberry has shown some promising results in preliminary trials involving other viruses, including Epstein-Barr, herpes simplex, and HIV.

Other evidence suggests that it can have a small beneficial effect on blood lipids and with a knock on effect of lowering the risk of heart disease.

Scientists from the Austrian University of Graz showed that elderberry extract reduces oxidation of low-density lipoprotein (LDL) cholesterol. Oxidation of LDL cholesterol is implicated in atherogenesis (the development of plaques on the artery walls), contributing to cardiovascular disease.

The flowers are a traditional remedy for relieving lung congestion. They promote sweating and so can cool fevers. They also have an anti-inflammatory action that can help reduce swelling in mucous membranes in the sinuses, helping to relieve nasal congestion.

Other preliminary research shows that an extract of the flowers has an insulin-like effect that could be beneficial in the treatment of diabetes.

Incorporating the flowers into your daily routine is simple if you brew them as a tea. Add 2-4 fresh elderflower heads (or 2 tsp of dried herb per cup) to a teapot, pour in boiling water to cover, leave to infuse for a few minutes, strain, and drink.

If you want to use the fresh berries foraging is still the way most people find them. Once washed and separated from their stems, they can be made into syrups, jams, compotes or smoothies or as an addition to fruit-based recipes.

All parts of the elder tree can be used medicinally, though the berries are the most popular. [Photo: Bigstock]