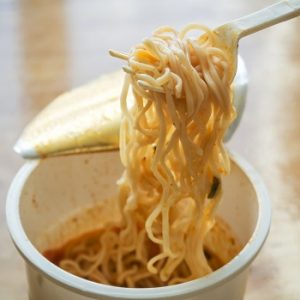 How food is labelled and presented determines how hungry you will be later. [Photo: Bigstock]

We also found that participants ate more later on when the pasta was eaten as a snack, that is, standing up, from a plastic pot, rather than when it was eaten sitting down, from a ceramic plate. Those who ate the most had eaten the pasta both labelled a snack and presented as a snack.

There has been a huge rise in obesity, around the world. A recent study, published in the New England Journal of Medicine, found that more than 10% of world’s population is now obese. Being overweight or obese is strongly correlated with premature death, so finding ways to reduce the amount of calories people consume is critical.

» Participants also either ate standing up with a plastic pot and fork (snack) or sitting down at a table using ceramic plates and metal cutlery (meal).

» Not long after the women were offered more foods – and those who had the ‘snack’ meal consistently ate more, suggesting that how we frame food influences consumption.

In our study, 80 women were randomly allocated to eat a set amount of pasta that was either labelled “eat this snack” or “eat this meal”. The women were also randomly allocated to either eat the pasta as a snack (standing up from a plastic pot, using a plastic fork) or as a meal (sitting down at a table, using a ceramic plate and metal fork). So there were four groups with 20 women in each (snack-snack, snack-meal, meal-snack, meal-meal).

After ten minutes, they then took part in a taste test where they rated a series of foods (Hula Hoops, animal biscuits, M&Ms, Mini Cheddars) and were encouraged to eat as much as they liked. The ratings were just to encourage food intake, but we measured how much they ate.

Those who ate the most in the taste test had eaten the pasta both labelled “snack” and presented as a snack; they ate 50% more food (by weight) overall, and 100% more M&Ms.

Careful how you frame it

When we think about eating well, we often consider the nutritional content of food – the vitamins and minerals, the number of calories, the fat or carbohydrate levels. The emphasis is on biology not psychology. But our study shows that eating well is also about how food is labelled and presented. The chemical make up of the pasta stayed the same, but the way it was framed changed.

It’s easy to gain weight because cheap, high-calorie, low-nutrition foods are everywhere. Due to our increasingly busy work and family lives, food is grabbed on the go and eaten at the desk, in the car or on the move as we rush between meetings. And as we are busy, we eat our food as a snack and don’t take time out to make it a meal. But, as our study shows, how we eat changes what we eat later.

But words are also important. Simply calling food a “snack” makes us think of it as less filling, makes us focus less while eating it, makes us more likely to forget we have eaten it, and the feeling of being full is changed by the perception of what we have eaten.

The food industry knows that how you present food matters, and uses this knowledge to our disadvantage. They label foods as “snack” regardless of their energy content, and they package foods in handy take-away bags and pots, encouraging us to eat them as snacks.

The government needs to recognise the importance of labels and put restrictions on the ability of the food industry to label foods as snacks. Employers could also help by encouraging their staff to take proper lunch breaks. But we can also help ourselves by considering food, no matter how it’s labelled or packaged, as a meal, and making space in our busy lives to sit down and eat it.

How food is labelled and presented determines how hungry you will be later. [Photo: Bigstock]