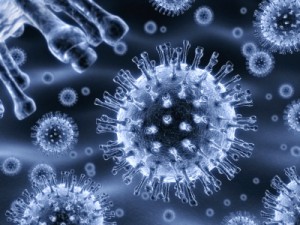 Nanoparticles in our food could have unintended and undesirable health consequences

If we didn’t have enough to worry about in the grocery aisles, with GMOs, toxic additives and pesticide-soaked foods, we can now add a new concern:  nanoparticles.

What exactly is a nanoparticle? As You Sow, a non-profit consumer advocacy group, explains:

“Nanomaterials are often heralded as having the potential to revolutionize the food industry – from enabling the production of creamy liquids that contain no fat, to enhancing flavors,improving supplement delivery, providing brighter colors, keeping food fresh longer, or indicating when it spoils. It is reported that nanotechnology is already used in food and food related products, but due to lack of transparency about the issue, concrete information has been difficult to obtain.

“Because of their small size, nanoparticles are able to go places in the body that larger particles cannot.  Nanoparticles in food or food packaging can gain access via ingestion, inhalation,or skin penetration. When ingested, the nano-sized particles facilitate uptake into cells and can allow them to pass into the blood and lymph where they circulate through the body and reach potentially sensitive target sites such as bone marrow, lymph nodes, the spleen, the brain, the liver, and the heart.

“Nanoparticles penetrating the skin can distribute through the body via lymphatic channels.  Inhaled nano TiO2 has been found to act like asbestos and silicone in that it accumulates in the lung and causes inflammation and can impact DNA proteins and cell membranes.” (You can download As You Sow’s Slipping Through the Cracks report on nanoparticles here)

So, much like GMOs, nanoparticle technology was not properly tested before it entered our food supply.

The few studies that have been done have alarming results.

Shuler said the research serves to underscore how such particles, which have been widely studied and considered safe, cause barely detectable changes that could lead to, for example, over-absorption of other, harmful compounds (see also the news story here).

One of the major issues with nanoparticles is that when a substance is reduced to nano form (about a billionth in scale) the substance behaves differently.

According to experts, the issue is that elements at the nanoscale behave differently from the larger sized particles in which they are normally encountered.

As an example, graphite’s properties are well known: it holds specific position in toxicology guidelines and is not considered a hazardous or reactive material under any normal circumstances.

Nobel winning physicist Richard Smalley of Rice University discovered carbon nanotubes and fullerenes (buckyballs) – nanoparticles of carbon – that are categorized as forms of graphite due to the way the carbon atoms are arranged. These particles, however, behave in ways unlike graphite, making their classification a potentially dangerous one.

Scientists know that substances become more reactive as their particles get smaller because the surface area is greater relative to the volume, providing a larger surface on which chemical reactions can occur for a given amount of the substance.

One example concerns the element iron. An iron nail will not burn, but the same quantity of the element in the form of an extremely fine powder will ignite spontaneously when exposed to air. Similarly, substances that are normally fairly inert may undergo unexpected chemical reactions in the human body or in the environment when in nanoparticle form (source).

Because of this concentrated effect, it isn’t known exactly how nanoparticles will affect humans.  They have been shown to cause altered gene markers and brain damage in fish, accumulation in laboratory animals, and at least one type of nanoparticle has been shown to cross the human placenta in preliminary studies.

What is the FDA’s policy on the inclusion of nano-particles in food?

The European Food Safety Authority requires that foods containing nanoparticles be labelled, but in America, the FDA does not require food manufacturers to report the nanoparticles on the label.

Ironically, the FDA also refuses to say that the nanoparticles are safe: “At this time, we are not aware of any food ingredient or [food contact substance] intentionally engineered on the nanometer scale for which there are generally available safety data sufficient to serve as the foundation for a determination that the use of a food ingredient or FCS [food contact substance] is GRAS [Generally Recognised as Safe].” (source)

The FDA allows the control over the use of nanomaterial to be in the hands of food manufacturers. According to the government agency’s website:

“Under existing statutory and regulatory provisions, manufacturers are able to voluntarily include information about the use of nanomaterials or nanotechnology in the labeling of products where such information presented in the context of the entire label or labeling is not false or misleading…and does not violate other labeling requirements.”

The FDA is apparently not tracking the use of these particles at all, according to an email exchange between EMagazine and the representative for the agency:

E Magazine: What can you tell me about the prevalence of nanomaterials in our food supply?

Sebastian Cianci:  FDA does not have a list of food products that contain nanomaterials.

E: Where are nanomaterials most often found within food products? In colorings or additives?

SC: FDA does not maintain a list of food products that contain nanomaterials so we cannot reliably answer this question.

The FDA is not asking questions because they really just don’t want to know. Big Food has too much influence within the agency for any true oversight to occur.

One frequently used nanoparticle is titanium dioxide.  This is included in the powdered-sugar coating on many pastries and lends them a whiter, brighter look. Wondering what to strike from your shopping list?  Titanium dioxide nanoparticles have provided a sparkling white appearance to the following, according to EMagazine:

Because manufacturers are not required to report the inclusion of nanoparticles (trade secrets) and because little analysis of processed food has been done to determine whether or not nanoparticles are present, it’s impossible to provide a comprehensive list of foods that contain nanoparticles.

How can you avoid nanoparticles?

Nanoparticles are impossible to avoid if you eat processed foods – and you won’t know if you are consuming them or not, because they aren’t on the label. More frightening, and potentially much harder to avoid, is the fact that there are some experimental farming methods that use nanoparticles too.

The food industry has taken its cue from the backlash against GMOs.  If we don’t insist on transparency, they will not provide us with information on what our food contains.  If we allow it, they will continue justify their silence by claiming that these tiny toxins are “trade secrets”. Will nanoparticles have negative long-term effects on human health?

We honestly don’t know yet, but preliminary research does not look good.  Vote with your wallet, and refuse to be a guinea pig for Big Food.

Nanoparticles in our food could have unintended and undesirable health consequences