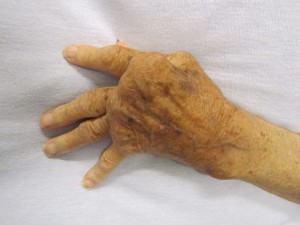 Exposure to nanoparticles can trigger chemical reactions in the body that lead to rheumatoid arthritis [Image: James Heilman - Wikimedia Commons]

Natural Health News — New groundbreaking research has found that exposure to nanoparticles can have a negative impact on health, linking it to rheumatoid arthritis and the development of other serious autoimmune diseases.

The findings that have been recently published in the international journal Nanomedicine have health and safety implications for the manufacture, use and ultimate disposal of nanotechnology products and materials.

Many sources of nanoparticles

Environmental pollution including carbon particles emitted by car exhaust, smoking and long term inhalation of dust of various origins have been recognised as risk factors causing chronic inflammation of the lungs. The link between smoking and autoimmune diseases such as rheumatoid arthritis has also been established.

This new research now raises serious concerns in relation to similar risks caused by nanotechnology products which if not handled appropriately may contribute to the generation of new types of airborne pollutants causing risks to global health.

Researchers at Trinity College Dublin’s School of Medicine investigated whether there was a common underlying mechanism contributing to the development of autoimmune diseases in human cells following their exposure to a wide range of nanoparticles containing different physical and chemical properties.

The scientists applied a wide range of nanomaterials including ultrafine carbon black, carbon nanotubes and silicon dioxide particles of different sizes, ranging from 20 to 400 nanometres, to human cells derived from the lining of the airway passages, and to the cells of so-called phagocytic origin − those cells that are most frequently exposed to the inhaled foreign particles or are tasked with cleaning up our body from them.

The result was clear and convincing: all types of nanoparticles in both the TCD and US study were causing an identical response in human cells and in the lungs of mice, manifesting in the specific transformation of the amino acid arginine into the molecule called citrulline which can lead to the development of autoimmune conditions such as rheumatoid arthritis.

Human proteins which incorporate this modified amino acid as building blocks, can no longer function properly and are subject to destruction and elimination by the bodily defence system.

Once programmed to get rid of citrullinated proteins, the immune system can start attacking its own tissues and organs, causing the autoimmune processes that can result in rheumatoid arthritis.

Commenting on the significance of the findings, lead researcher Professor of Molecular Medicine, Yuri Volkov of Trinity college says: “The research establishes a clear link between autoimmune diseases and nanoparticles. Preventing or interfering with the resulting citrullination process looks therefore as a promising target for the development of future preventative and therapeutic approaches in rheumatoid arthritis and possibly other autoimmune conditions.”

Exposure to nanoparticles can trigger chemical reactions in the body that lead to rheumatoid arthritis [Image: James Heilman - Wikimedia Commons]