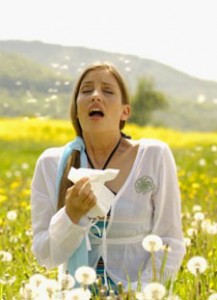 Spring is the beginning of a 'pollen season' that, thanks to climate change, can last well into autumn

Hay fever can be a really miserable experience for an increasing number of people.

While most of us think of the end of summer as the end of the hayfever season there are, in fact, several hayfever seasons throughout the year, and for a large proportion of the population each one brings new a torment.

In spring just as the weather is perking up and we want to spend more time outside, many are stuck indoors because of the discomfort caused by hay fever symptoms such as sneezing, itching eyes and nose and increased mucus caused by tree pollens.

In summer grass pollens bring misery to the majority of sufferers and then autumn brings a final flurry of fungal spores and autumn flower pollens to contend with.

What is more, as our global climate changes, hay fever ‘seasons’ are changing and extending, bringing longer periods of misery to many. And of course, environmental pol­lution traps pollens in the atmosphere.

When and how much pollen is released from plants is also dependent on day-to-day  weather cycles. Because many plants require exposure to a certain amount of heat before they will release their pollen, a cold or wet spring may delay the release of pollen from trees by weeks. Pollen release also varies depending on the temperature, humidity, rainfall, wind and sun.

Early mornings are generally the worst time for pollen concentrations because at that time of day plants are busy pumping out pollen and this easily accumulates in the still stable surface air.

While there are many conventional medical approaches to hayfever, few are problem-free.

Amongst the prescription-based medicines steroid tablets, have seri­ous side-effects, such as diabetes, osteoporosis and blood vessel damage. They are particularly unsuitable for children.

Steroid-based eyedrops can also cause problems over the long term and have been linked to glaucoma, cataracts, corneal damage and, ultimately, blindness.

Decongestant tablets or nasal sprays available both by prescription and over the counter will reduce a blocked nose in the short term, but tend to leave you with a worse problem when you stop using them.

The phenylpropanolamine, found in over-the-counter (OTC) decongestants has been linked to strokes, making such medications particularly dangerous for people with high blood pressure.

Anti-histamines which can also cause a variety of side-effects such as headaches, rashes, photosensitivity, gastrointestinal problems and heart arrhythmias. The most potentially dangerous side-effect is drowsi­ness, which may lead to fatal accidents.

No wonder many people are looking for a more natural approach!

General dietary advice includes avoiding dairy products during the hay fever season, as these can tend to increase the production of mucus. You should also avoid sugar, as this can impair the effectiveness of the immune system and thus make the allergy symptoms worse.

Dietary supplements to take to relieve the symptoms of hay fever include quercetin and vitamin C.

Quercetin is a bioflavonoid (special nutrients found with vitamin C in fruit and vegetables) with anti-inflammatory, antioxidant and anti-histamine properties. It works as an anti-inflammatory agent by deactivating enzymes that produce inflammation and strengthening cell walls that would normally release histamines into the blood stream.

Vitamin C should also be taken alongside the quercetin as it enhances the effectiveness of bioflavonoids. Take 200mg of quercetin three times daily and 500mg of vitamin C daily.

One of the most important herbs to use is eyebright, which can be made into a soothing eyewash and taken internally to relieve symptoms of itching eyes and congestion.

Make an infusion by adding a heaped teaspoonful of herb to a teapot and pouring on a cupful of boiling water; leave to stand for 10 minutes then strain and drink. To use as an eyewash make the infusion and then when cool strain through muslin and use in an eyebath.

Other herbs to drink as an infusion include elderflower, a decongestant; hyssop, which is antispasmodic; and nettle for its anti-histamine properties.

The main homoeopathic remedies to choose from are Allium cepa, Euphrasia and Sabadilla. These are often taken as a combination remedy which covers the main symptoms of sneezing, itching and inflamed eyes and streaming mucus.

Take a 30C potency every 4-6 hours. If your main symptoms are an intolerable itching of the roof of the mouth and nose then the best remedy is Arundo.

Often it takes a multifacted approach to relieve the symptoms of hay fever. some other options you should consider are:

Remember also to be patient. Hayfever symptoms often improve, and can even disappear, with age. If you had your first attack before age 30, your symptoms should ease as the years go by.

In the mean time, get someone else to mow the lawn, while you sip a reviving cup of herbal tea!

Spring is the beginning of a 'pollen season' that, thanks to climate change, can last well into autumn