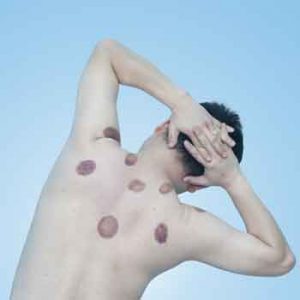 Bruises left behind by the ancient Chinese therapy known as cupping. [Photo: Bigstock]

Q – I’ve noticed that many athletes in this year’s Olympics have dark red circles on their bodies, the result of using cupping to relive pain. Can you tell me what this process involves and whether it really works?

A – Although elite athletes are often the first to pick up on trends for healing – such as copper bracelets or kinesiology tapes – that doesn’t mean that these choices have necessarily been well-researched.

Cupping, a traditional Chinese practice aligned with acupuncture and acupressure, is a good example of this.

The theory behind cupping is that creating strong suction over specific acpupoints helps draw blood to the area and this, in turn, can help relieve pain and speed healing.

There are essentially three methods of cupping: dry, air and wet.

In dry cupping glass cups are warmed using a cotton ball or cotton bud soaked in a flammable substance like white spirit. Burning a substance inside the cup also removes all the oxygen, which creates a vacuum.

The cup is turned upside-down over a specific area and the vacuum created by the lack of oxygen anchors the cup to the skin and pulls it upward on the inside of the glass as the air inside the jar cools. Sucking up the skin is believed to stimulate the flow of blood, balance and realign the flow of essential energy or qi, and draw toxins out of the body.

Air cupping uses a suction pump rather than a flame to create suction and draw the skin up. Some practitioners prefer this because the level of suction can be controlled and it can result in less dramatic bruising.

Wet cupping is a more dramatic form of cupping which involves cutting or puncturing the skin before placing the cup over it. The suction then also draws a small amount of blood, which is believed to speed the removal of toxins from the body.

There’s nothing to show that cupping is essentially unsafe – though the incisions or punctures made to the skin in wet cupping can lead to overuse of antibiotic creams and/or infection.

Proponents – who include swimmer Michael Phelps and gymnast Alex Naddour as well as celebrities such as Victoria Beckham, Jennifer Aniston and Gwyneth Paltrow – say that cupping can help with general aches and pains as well as specific problem s such as back pain. However, modern science has not been able to consistently confirm these benefits.

It seems to work…

There are plenty of negative studies or those that draw skeptical conclusions. But positive studies do exist too.

A small study published earlier this year examined how well cupping therapy worked to treat self-reported neck and shoulder pain. Half the 60 patients received cupping therapy, while the other half got no treatment at all. Patients who underwent cupping did report a significant improvement in pain compared to those who didn’t.

Another study into neck pain suggests that the relief it provides, as assessed by the patients themselves, is meaningful.

One study that looked at cupping as a treatment for 40 patients with knee arthritis also turned up positive results.

There is evidence to indicate that cupping, when combined with acupuncture, may reduce fibromyalgia symptoms more effectively than conventional medications such as amitriptyline.

A handful of reviews have looked at the collective evidence for cupping.

A 2010 review in BMC Complementary and Alternative Medicine concluded that cupping seemed to provide relief from herpes zoster and other painful conditions adding that the quality of studies seemed to be improving in recent years due to increased interest in the therapy.

A 2012 study, which reviewed 135 trials of cupping therapy from 1992 to 2010, concluded much the same but recommended “further rigorously designed trials on its use for other conditions are warranted”.

Yet another review of the evidence in 2014 concluded that there is a potential positive short-term effect of cupping therapy for reducing pain intensity compared with no treatment, heat therapy, usual care or conventional drugs.

None of the studies into cupping suggest any significant adverse effect from the procedure. However, the process isn’t painless and the red welts you see on the athletes’ skin are bruises – and whichever way you look at it bruises are a sign of some kind of damage, however superficial.

…but we don’t know how it works

That it may work is clear. How it works is another matter.

Some believe that the effect is mere placebo and that having gone through the uncomfortable procedure people simply develop the will to believe that it works.

Some practitioners believe that forcing blood to specific areas of the body stimulates a mild immune reaction and that this may be behind its reported benefits.

Others believe that its benefits are down to what is called ‘counter irritation’ – that is, the suction creates a greater or simply different pain which temporarily draws your attention away from the original source of pain or injury. None of these theories has been scientifically proven.

The bottom line is that what works for one person might not work for another. If you are considering trying cupping therapy, talk it over with a qualified practitioner.

Bruises left behind by the ancient Chinese therapy known as cupping. [Photo: Bigstock]