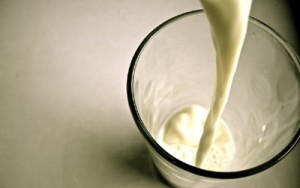 Q&A: What are the benefits of raw milk?

Q – I’ve heard a lot about raw milk and I’d like to try it. But I’m worried it might not be safe. Can you tell me a bit more about it?

A – Otherwise known as ‘green-top’, raw milk is the least processed milk you can buy. Long-term drinkers of this rare but much-loved substance say it is healthier, fresher and tastier than any other milk available. Others consider it a health hazard.

Unlike the vast majority of the 13 billion litres of milk produced in the UK each year, raw milk has not been pasteurised (heat-treated) or homogenised (blasted at pressure through small holes to smash up the fat globules, spreading them evenly throughout the milk).

Here are some of the most common questions people have about raw milk:

The main the arguments against pasteurisation are nutritional. Proponents belive that the high temperatures needed for pastuerisation:

Pasteurisation also distorts the fragile milk protein into a variety of different shapes or configurations, many of which are allergenic. It also destroys a fifth of the iodine content which can lead to constipation and makes the milk lose part of its vitality.

The Food Standards Agency takes a safety-first stance, warning that it ‘could be harmful’ and should be avoided by the young, elderly, pregnant or unwell. By law, unpasteurised milk from cows, goats or sheep must carry a warning: ‘This milk has not been heat-treated and may therefore contain organisms harmful to health.’

In spite of this lack of availability and off-putting cigarette-style health warnings, raw milk still has its loyal devotees. Articles in the mainstream papers discussing the pros and cons of raw milk have seen it attracting a growing number of customers.

What are the health benefits of raw milk?

Much of the evidence regarding its health benefits is anecdotal, but a 2006 study by the University of London found that drinking just a couple of glasses of raw milk a week reduced the risk of allergy-related conditions such as asthma, eczema and hay fever in children. A larger study in Germany found the same thing.

Raw milk is an excellent whole food. It contains all the valuable enzymes that pasteurisation destroys (including lactase, which breaks down lactose, meaning it is possible for people who are lactose-intolerant to drink it). Enzymes help the body assimilate nutrients, including calcium. It has higher concentrations of probiotics (beneficial gut bacteria including lactobacillus and acidophilus), which help the body digest milk.

It also contains CLA, a ‘super-fat’ that promotes weight loss and is an anti-cancer agent, as well as more vitamins. According to US-based organisation the Campaign for Real Milk, raw milk contains 10% more B vitamins and 25 % more vitamin C than conventional milk.

Another process that raw milk avoids is homogenisation. Raw milk contains the natural butterfat that is homogenised or removed in commercial milk. Without butterfat, the body cannot absorb and utilise the valuable vitamins and minerals in the milk.

As Graham Harvey, author of We Want Real Food, writes: ‘for maximum nutritional benefit, milk should be drunk whole with minimal processing… the very best is raw and unpasteurised from cows fed principally on grazed grass.’

Tell me more about how it is produced…

Raw milk tends to be produced on farms with small grass-grazing herds. Grass-fed cows have a more free-range existence and their milk contains high levels of vitamins, including A, D, K and E, and essential fatty acids. Because this milk is not pasteurised, producers also have to be far more stringent on hygiene and the health of their herd than conventional dairy farmers.

Farms are more regularly tested by the Dairy Hygiene 71 inspectorate. Ironically, the infections in cattle that can lead to human illness, such as TB and E. coli poisoning, are more likely to result from more intensive, industrialised farming. Kept in sheds as part of a large herd, disease is endemic. Around 40% of the national herd suffers from mastitis or udder infection – hence the routine use of antibiotics.

Environmentally, raw milk has the lowest impact of any milk. Cows that graze on grass for much of the year don’t need extra feed, including grain and soya imported from abroad, required by higher-yield cows, which are kept indoors for long periods. Normal milk goes by milk tanker lorry to dairy, to supermarket distribution depot and thence to supermarket stores nationally. Raw milk has fewer milk miles and saves energy by not being heat-treated.

Many people find the milk tastes sweeter. This is down to its freshness – the longer milk hangs around the less sweet it is. Most milk you buy in shops is five days old by the time it reaches the shop, after it’s been collected, transported to dairies, pasteurised and packaged. It’s also a brilliantly versatile substance, with cream on top and ‘semi-skimmed’ milk below – or shake it to get ‘whole’ milk.

Where can I buy it?

It is illegal to sell unpasteurised milk in Scotland although people do find ways to get around it – a ‘cowshare’ project allows you to buy shares in a cow, for example.

In England and Wales you can only buy it from farm gate-licensed suppliers – sales through other outlets were banned in 1985 – so you’ll find it on the odd milk float, in farm shops or at farmers’ markets. There are only 150 unpasteurised milk producers left in England and Wales (in 1997 there were 570) and now it represents just one per cent of the household market.

In the US availability varies from state to state. Currently:

That said, the whole idea of having raw milk is that customers know exactly where it comes from – there’s a bond between consumer and producer.

The best way to find out if raw milk is for you may be to buy a bottle at your nearest farmers’ market and if you like it, support a raw milk producer near you.