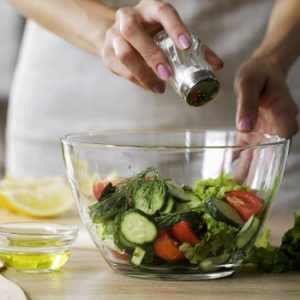 Scientists have found ways to trick the brain into thinking you're tasting salt. [Photo: Bigstock]

Salt: how to cut back without losing that delicious flavour

One of the targets of the UK government’s new health strategy is salt.

Your body needs salt to function normally, but an excess leads to raised blood pressure and an increase in the risk of stroke and heart disease. Since prevention is better than cure, the government has ambitious plans to get the public to consume less salt.

The recommendation for salt intake is to limit it to only 6g a day (about a heaped teaspoon). However, the average intake is closer to 8g a day. The statistics suggest that if the 6g a day target is achieved, it will prevent over 8,000 premature deaths each year and save the NHS over £570m, annually.

But food without salt is bland, and low-salt products are often bland compared with their standard counterparts. Salt in food gives us that highly desirable lip-licking taste on the tongue that makes food interesting and enjoyable. It also boosts the flavour of food, which is what we experience when we combine the tastes from the tongue with the aromas we detect with our nose.

So, can we reduce the salt in our diet yet keep all the delicious flavours we crave? This is a problem the food industry has been working on for years.

Tricks of the trade

One approach the food industry has taken is to change the size and shape of the salt particles so that more of them reach the receptors on the taste buds on the tongue. This addresses the lack of salty taste when the amount of salt in processed food is reduced. But a different approach is needed to address the lack of overall flavour.

At home, this can be overcome by adding more herbs and spices. Another trick is to add foods that contain natural flavour enhancers, such as tomatoes or parmesan cheese, and combine these with low-salt soy sauce or tiny amounts of fish-based sauces, such as Worcester sauce, which contains anchovies. This works well because the nucleotides found in the fish and in the soy sauce work together with glutamic acid found in tomatoes or in cheese to give a more powerful savoury flavour.

We can further enhance the perception of saltiness by adding low levels of aromas that we associate with salty foods. This is the savoury version of adding vanilla to low-sugar products to give the impression that they are sweeter.

Researchers have tested complex flavourings as well as single aroma compounds for their ability to make us believe there is more salt in food than there actually is. The aromas that have been tested smell like meat, sardines, cheese or anchovy. And because we associate these foods with saltiness, we perceive the product as saltier, even though no salt has been added. In other words, we can trick the brain into thinking we are tasting salt.

There is also a backup plan. Researchers at the University of Reading have shown that the more we consume no-salt soup, the better it tastes. The participants in this study did not particularly like the no-salt soup, but after consuming it once a day for a week, participants liked the taste more than when they first tasted it. So you can always train your brain to enjoy a low-salt diet. It just takes practice.

Scientists have found ways to trick the brain into thinking you're tasting salt. [Photo: Bigstock]