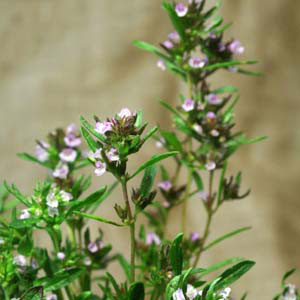 Spicy, pungent and aromatic savory is one of the popular culinary herb widely employed in the eastern European and American cuisines.

Botanically, this annual herb, which is the International Herb Association’s Herb of the Year 2015, belongs within the mint family (Lamiaceae) and known scientifically as either as Satureja hortensis (summer savory) or Satureja montana (winter savory).

Summer savory has been used to flavour food, and as a strewing herb for over 2000 years, the Romans introducing the herb to England where it was used both in cooking and medicinally. The Saxons named it savory for its spicy, pungent taste. The Latin name “satureja” comes from the word “satyr”, the mythical half-man half-goat. Legend has it that this was his herb.

Winter savory is thought to have stronger antiseptic, aromatic, carminative, and digestive benefits – for instance in colic, flatulence, nausea and diarrhoea – than the summer variety. Savory is trditionally known medicinally as a carminative and a powerful digestive aid.

It is also traditionally used as an expectorant and the fresh leaves are an instant first aid for insect stings suffered while working in the garden. . In Elizabethan times, the leaves were crushed into poultices for the treatment of colds and chest ailments like asthma. A tea of savory can be helpful for diarrhoea and can also stimulate the appetite. Cherokee Indians used the herb as a snuff to cure headaches.

Savory as with other plants in the Lamiaceae family contain the essential oils carvarol, cineole, and thymol, which are known to be antioxidant and antibacterial, antiseptic, and antifungal applications. Therapeutic-grade oil has been determined to inhibit growth of Candida albicans. Savory can be used instead of sage and thyme for coughs colds and sore throats. The plan’s high levels of thymol mean that winter savory should not be taken during pregnancy.

Once thought to be a powerful aphrodisiac the monks of the Benedictine order were banned from growing it in their monastery gardens. Animal studies have since suggested that a daily oral dose of winter savoury could benefit cases of premature ejaculation and may even protect the testes from drug-induced damage.

Described as having hints of both thyme and marjoram, all species have similar hot peppery flavours. With its pungent flavour, savory makes an effective and safe condiment to use for those on specialised, salt-restricted or bland diets.

Savory is used commercially as a flavouring in salami. This traditional mix flavours any dishes from the Mediterranean region especially pizza toppings, baked tomatoes or sprinkled over kebabs.

It combines well with thyme, rosemary, sage, bay or marjoram, and can be used with fish, chicken, meat, and vegetable dishes. Add just before the end of the cooking cycle to preserve its flavour.  Add savory to stuffing mixtures for roast poultry. Add savory leaves when cooking any vegetables of the brassica family (cabbage, kale, Brussels sprouts, cauliflower). The herb will improve flavour and reduce the odour.

Savory along with oregano, thyme, rosemary and marjoram is one of the five herbs combined and used in “Herbs de Provence” (see recipe below)

Other ways to use savoury in the kitchen include:

Try making your own Herbs de Provence mixture with the following recipe:

Use high quality dried herbs to get the best flavour

Combine the herbs and store in an airtight container. If you want to make a fine powder for rub or marinade run through a herb grinder or combine all ingredients in a blender process on a low to medium setting for about 10 seconds.