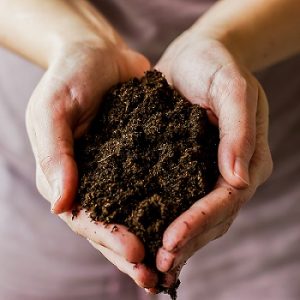 When the soil is healthy is provide healthy food for us to eat and supports amazing planetary biodiversity and helps fight climate change. But did you also know that soil contains a natural anti-depressant?

A tiny microbe that lives in healthy soil, Mycobacterium vaccae, has been found to have the same effect on neurons in the brain that drugs like Prozac do. It can stimulate serotonin production which can help you feel more relaxed and happy.

The psychological benefit of nature has been well documented. When it comes to being happy or not, many studies show that psychiatric problems are more common in urban than in rural communities and that time in nature may be the best ‘prescription’ for stressed city dwellers.

Compare that with the belief, held by many gardeners, that the garden is their ‘happy place’.

» Many gardeners think of the garden as their ‘happy place’ and, indeed there are many psychological benefits to be gained from being outdoors.

» Recent research suggests that one way in which gardening benefits us is through exposure to beneficial microbes, Mycobacterium vaccae, which we inhale and ingest when we dig the garden or eat freshly picked produce and which appears to increase levels of serotonin in the brain.

» M vaccae is now being investigated so we can better understand how it supports mental health in humans .

How it all works is still not clear. Antidepressant microbes in soil appear to work by stimulating the immune system causing levels of cytokines (chemical messengers in our cells) to rise. This in turn boost production of serotonin.

Serotonin, also known as 5-HT (short for 5-hydroxytryptamine), is found at several sites in the body, such as the gut, brain, nerves and blood.

It has multiple roles in the body including constricting blood vessels, sending messages between cells in the brain and within the central nervous system, regulating digestion, and aiding the passage of food through the gut.

Antidepressants work by increasing serotonin levels in particular areas of the brain.

Human are, in effect, ecosystems. This is why research into gut microbes, probiotics, and fermented foods is turning up so much interesting information about the balance of flora in our guts and its relationships to health.

Research has shown that brain levels of serotonin may be linked to the amount of healthy bacteria in the gut during early life.

But while most of the bacteria in our guts has been there from birth, a proportion of our gut flora comes from outside the body.

A recent paper from scientists at the Centre for Clinical Microbiology at the University College London, explored those connections, concluding that the regulation of the immune system really is connected to the biodiversity of the natural environment and that our health benefits from regular exposure to what the researchers called “old friends” – the microorganisms which we have co-evolved with.

Studies in animals and humans

According to a 2007 study in mice, administration of M vaccae, through injection or diet, activated brain cells to produce serotonin and this in turn altered the mice’s behaviour in a similar way to antidepressants. Results showed it helped the animals stay calm during periods of stress as well as enhancing learning ability and concentration.

The researchers went on to suggest that this could explain why immune system imbalance could make some people vulnerable to mood disorders like depression.

Another study in 2013 found much the same.

In humans, mycobacterium studies of wide health benefits are thin on the ground though it has been investigated for potential in treating tuberculosis, for treating bronchitis and hayfever Studies in cancer patients report a better quality of life and less stress and there is some evidence to suggest it my improve long-term survival rates.

Get your hands dirty

When we work with soil in our gardens we inhale these beneficial bacteria. We get it on our hands and into our bodies via cuts and scratches or when nibble on vegetables picked fresh from the garden.

So the next time you are feeling stressed or depressed it may be worth going out and getting your hands dirty and giving the ultimate ‘natural remedy’ a try.