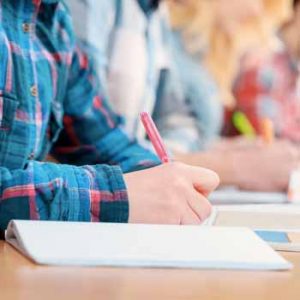 A classroom with a green view may be the best way to help relieve stress and improve academic performance. [Photo: Bigstock]

Natural Health News — Staring out the window isn’t the worst thing a student can do – especially if the view includes a natural landscape.

New research, from the University of Illinois Department of Landscape Architecture, found that students with a green view outside a classroom window performed better on tests requiring focused attention and recovered better from stress, than did those in a windowless room or a room with a view of built space.

Published in the journal Landscape and Urban Planning, the authors claim it is the first study to establish a direct relationship between exposure to a green view and students’ performance.

» Student life can be stressful, especially around exam time.

» Previous studies have shown that being able to look out the window on a green view can have a restorative, uplifting effect on hospital patients, but the effect on students has not been assessed.

» In this study, students given a series of complex tests with a break in between, were less stressed, recovered from stress more quickly and were 13% more focussed on their work when they had a green view to look out on.

“It’s a significant finding, that if you have a green view outside your window, you’ll do better on tests,” said co-author  Dongying Li, a doctoral student and one she hopes would lead to changes in the way schools approach classroom design, and access to nature.

The students participated in a variety of taxing tests with a break in between and their stress levels were measured by sensors monitoring heart rate, skin temperature and skin moisture as well as by asking the them to fill out questionnaires at different points during the experiment.

Students in the windowless room or the room with a view onto a built space performed roughly the same as each other.

They hypothesise the reason has to do with what Li calls Attention Restoration Theory. When someone focuses on a task, he or she must ward off other distractions, either those in the environment or the thoughts inside their head, all competing for attention. Doing so causes fatigue, and after a while, a person feels mentally drained.

Taking a break from focused attention and focusing on those things doesn’t require effort, and the theory suggests that doing so provides an opportunity for the brain to rest and restore its ability to focus attention again. But the natural view – which previous studies in hospital patients have shown can have an uplifting effect – seems to be key since there was no restorative effect for students with no green view.

The researchers suggest their findings can help designers, planners and policymakers enhance students’ well-being and learning. For example, planners can identify sites for new schools that already have trees and other vegetation, or they can plant many trees on the site; architects can locate classroom, cafeteria and hallway windows so they look onto green spaces; and school schedules can allow short breaks to restore students’ attention and help them recover from stressful tasks.

Doing this, said co-author William Sullivan “would be a much better investment than any of the things we spend money on in secondary education today.”

A classroom with a green view may be the best way to help relieve stress and improve academic performance. [Photo: Bigstock]