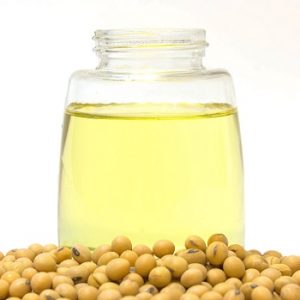 The GMO oil link to liver disease and more

Many consumers are wary of eating GMOs – concerned that there may be as yet unrecognised health risks. As it turns out that concern may be justified.

According to a new study, a genetically-modified (GM) soybean oil used widely in US restaurants can raise the risk of fatty liver disease, and may also lead to changes linked to a higher risk of diabetes.

Researchers at the University of California, Riverside designed a series of high-fat diets, based on coconut oil, conventional soybean oil, or GMO soybean oil (Plenish® manufactured by DuPont), and fed them to experimental mice.

Each diet had a total fat content similar to that of the typical American diet, i.e. 40% of calories from fat.

The long-term results showed that coconut oil caused the least amount of weight gain of all the high-fat diets tested. “We found all three oils raised the cholesterol levels in the liver and blood, dispelling the popular myth that soybean oil reduces cholesterol levels,” added Dr. Sladek, professor of cell biology, who led the research.

» A comparison of the health effects of a GMO soya oil – marketed as a healthier alternative – to other oils has shown worrying effects on the liver.

» Plenish is a GMO soybean oil produced by DuPont claims to have a similar health profile to olive oil.

» The researchers suggest that GMO soybean oil as consumed directly by humans, as well as by the animals they consume (via animal feed), may be linked to rising rates of obesity.

Fatty liver has been linked to high olive oil consumption previously but as noted in one paper, much depends on the overall composition of the diet – for instance whether it is also high in unrefined carbohydrates – rather than just the olive oil itself.

“Plenish, which has a fatty acid composition similar to olive oil, induced hepatomegaly, or enlarged livers, and liver dysfunction, just like olive oil,” Deol stated. “In our mouse experiments, olive oil produced essentially identical effects as Plenish—more obesity than coconut oil, although less than conventional soybean oil—and very fatty livers, which was surprising as olive oil is typically considered to be the healthiest of all the vegetable oils.”

The studies also indicated a positive correlation between what are known as theoxylipin metabolites of linoleic acid and obesity. Previous research has identified a link between oxylipins and detrimental health effects, the authors note:

“Oxylipins in general, as bioactive signalling lipids, are increasingly being associated with inflammation, vascular permeability, and cardiovascular disease as well as diabetes, obesity-induced hypertriglyceridemia, and insulin signalling.” They acknowledge, however, that our understanding of the link between oxylipins, obesity and other aspects of the metabolic syndrome is still poor.

Nevertheless, the UC Riverside researchers note that the global increase in soybean consumption worldwide parallels the rise in obesity. Figures by the US Centers for Disease Control and Prevention (CDC) indicate that 35% of the adult US population is obese, and Dr. Sladek and colleagues suggest that this obesity epidemic may be linked with soybean oil intake.

They also speculate that the detrimental effects of animal fat that are observed in experimental rodents may also be related to the high levels of linoleic acid that is contained in the soybean meal fed to farm animals.

“The vast majority of diet-induced obesity studies use lard as the source of fat and assume that they are looking at the effects of saturated fat, as well as cholesterol,” the authors write. “In the US, lard comes from animals that are typically fed soybean meal and consequently the levels of LA [linoleic acid] in lard can be quite high (11% or higher).  Hence, it is possible that some of the metabolic effects in the literature attributed to saturated fats in these lard-based studies could actually be due to high LA from soybean oil, as others have found with farmed salmon.”

An oil to avoid 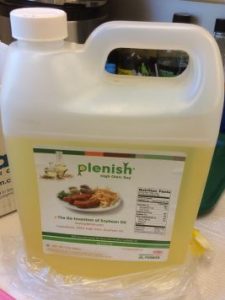 On the basis of their findings, published in the journal Scientific Reports, the researchers recommend that people avoid soybean oil – conventional and GMO – as far as possible. “This might be difficult as conventional soybean oil is used in most restaurant cooking and found in most processed foods,” Deol added.

While DuPont provided Plenish oil for the study, the company played no role in designing the experiments or in preparing the manuscript, and had no knowledge of the results before publication, the researchers note.

In the UK too

This is not just a US phenomenon. In the UK, restaurants – from fast food to high end – regularly cook with GM oils including soya oil.

Restaurants and other establishments are legally obliged to indicate on the menu – including online menus – if they are using such oils. However, UK Trading Standards reports show that most don’t. That means that customers – unless they ask specific questions, and in some cases ask to see the oil cans – never know if their food is being cooked in GMO oils or not.

In addition, most conventionally reared livestock is fed on GM feed, including added oils in the UK and the rest of Europe. This means that the growing problem obesity, and potential liver damage, here may also have a GMO component. Another good reason to make the switch to organic!