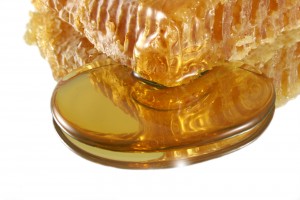 Manuka honey has been singled out as having special antimicrobial properties.

The medicinal magic of manuka

Honey has been regarded as a healing substance for more than 4000 years, but it’s really only in the last couple of decades that we’ve started to talk about it as a ‘phytomedicine’.

In spite of the fact that it’s one of the world’s oldest natural remedies we are still uncertain about precisely what makes it work.

Honey is made up of around 80% simple sugars (glucose and fructose) and 20% water. It also contains vitamins A, B-complex, C, D, E, K and beta-carotene, as well as minerals, enzymes, essential oils, flavonoids, terpenes and polyphenols, any or all which may be account for its medicinal qualities.

Raw, unprocessed honey (which is somewhat different from you find on sale in supermarkets and healthfood shops) has the greatest medicinal and nutritional value. And while all honey contains some antioxidants, the stronger, darker honeys, such as those from buckwheat, sagebrush and tupelo, are thought to be of the greatest medicinal benefit.

The way honey works in the lab may be very different form the way it works in the human body. However, lab studies are our main source of information about therapeutic benefits of honey.

It is thought that undiluted honey works against bacteria in one of two main ways, either bacteriostatic (preventing or slowing the growth of the bacteria) or bactericidal (killing the bacteria).  It does this through one or a combination of four factors:

Acidity – Honey has a pH of between 3.2 and 4.5 – acidic enough to slow down or prevent the growth of many species of bacteria. But once ingested or applied to the skin it is diluted by body fluids. This may significantly reduced antibacterial activity.

Osmolarity – The sugar present in undiluted honey acts like a water magnet, pulling water away from bacteria. This effect deprives the bacteria of the water necessary for it to grow and reproduce. Once again, this effect is somewhat neutralised when honey is diluted in body fluids.

Hydrogen peroxide – the hydrogen peroxide (H2O2) in honey is activated when it comes into contact with water and may explain why dilute honey can still be effective at inhibiting bacteria in the lab. But the human body quickly breaks down H2O2. It can also be deactivated by exposure to heat (as in the bulk of pasteurised honeys on the market) and exposure to light.

Phytochemical factors – H2O2 does not account for all of honey’s antibacterial properties. However, the “other” factors which are responsible for honey’s bacteria fighting effect have not yet been identified.

There are many different types of honey, but the honey that comes from the Manuka plant (a native of New Zealand) has been particularly singled out as having special antimicrobial properties.

Manuka is a wild growing shrub native to New Zealand. It was extensively used by the indigenous Maori population of New Zealand as a medicinal plant to heal and fight infection, and has been the subject of much recent research for remarkable antibacterial properties that can accelerate wound healing and may even kill the helicobacter pylori bacterium that causes gastric ulcers and dyspepsia.

The raised profile of honey in general, and manuka in particular, is due largely to the work of Professor Peter Molan, an Associate Professor at the Honey Research Unit, Biological Sciences Department, University of Waikato, in New Zealand. His department has been researching honey for 30 years. In 1995, Molan was made a MBE for his work in detecting the bacteria killing potential of manuka honey.

Most honeys also contain useful levels of hydrogen peroxide – produced by an enzyme that bees add to the floral nectar. It is this hydrogen peroxide effect that is believed to be key to the antibacterial effect of most honeys, but not to manuka.

In one laboratory study of 345 unpasteurised honey samples, the majority exhibited antibacterial action against Staphylococcus aureus. However, when the natural hydrogen peroxide was removed from the honey samples, only honey from manuka  (Leptospermum scoparium) and viper’s bugloss (Echium vulgare) were still active against the bacteria.

Manuka has also been shown to be useful against Helicobactor pyloria bacteria, which causes stomach ulcers. This bacteria seems to be 5 to 10 times more sensitive to Manuka honey than to any other honey and in the lab, it completely halted growth of the bacterium at a concentration of five per cent. However, human research is decidedly lacking in this area.

There is now good evidence to show that manuka can aid wound healing. Many holistic caregivers in New Zealand, Australia and England now regularly use manuka honey for treating wounds, leg ulcers, burns and eye infections. Its usefulness in wound healing may be in part because raw honey contains bee pollen, enzymes and propolis, all of which are thought stimulate new tissue growth.

The most notable result of the above research was that “average” honeys can be diluted nearly tenfold yet still completely halt the growth of all the major wound-infecting species of bacteria.

Manuka however could halt S. aureus when diluted with 54 times its volume. S. aureus is not only the most common wound-infecting bacteria, but is also notorious for developing resistance to conventional antibiotics, so having another way of fighting the bacteria is crucial these days.

All honeys are not the same

Recently there have been shocking reports of ‘fake honey‘ flooding the market in the US and elsewhere. Often it is ultra-purified honey from China, Africa and elsewhere, which has been put through a microfiltration process to remove all traces of pollen (thus making it impossible to identify its actual origins geographically or horticulturally). In extreme cases it is synthetic honey, brewed in the lab from sugar and other ingredients. This is often the pale cheap stuff you see in squeezy bottles and it has no therapeutic properties at all.

While manuka honey is not subject to this kind of fakery, the antibacterial properties of manuka honey varies as extensively as any other genuine honey. However, by combining honey harvests companies are able to produce a product with measurable antibacterial activity. In New Zealand, the level of this activity is measured on a scale of 1 to 15, indicating its “Unique Manuka Factor,” an idea similar to the sun protection factor (SPF) in sun creams.

As a registered and trademarked standard, the UMF system gives a reliable guarantee to rate the antibacterial properties of different sources of manuka honey. The number in the UMF rating is equivalent to the per cent of phenol (a strong disinfectant used for cleansing wounds) activity against the bacteria S. aureus.

So a rating of UMF10 denotes an antibacterial activity equivalent to a 10% phenol solution. A UMF of 10 is considered the minimum necessary for serious medical applications though a UMF of 25+ is usually recommended for the best effect.

Although the word “manuka” has become a kind of short-hand for cure-all (something which Molan and his team have never claimed). It is clearly one of our most useful natural treatments and one that has benefitted from some serious scientific research.

New Zealand is the only place in the world that genuine manuka honey can be produced, but other areas of the world also claim to produce active honey. Most recently active rainforest honey from Chile has begun to be sold in the UK. This, however, is less well studied than New Zealand manuka though the research commissioned by its manufacturers suggest it also has a powerful antibacterial effect . There is also a medical grade honey called Revamil, produced in an industrial manner by bees in closed greenhouses which has shown some promise as an anti-bacterial.

Whether you use it to heal wounds or soothe a sore throat or just sweeten your tea honey is a remarkable substance. It is, of course made by bees, but our bee populations are rapidly declining.

Honey bees pollinate about 80% of flowering crops, which in turn furnish one third of the human diet. Albert Einstein is generally credited with saying “If the bee disappeared off the surface of the globe then man would only have four years of life left. No more bees, no more pollination, no more plants, no more animals, no more man.”

As a natural health resource we should do all we can to understand and protect it for future generations.

Manuka honey has been singled out as having special antimicrobial properties.