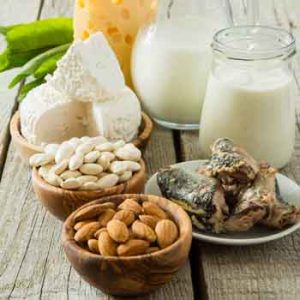 Calcium for your bones? Food vs supplements

Natural Health News — We are often told that we don’t absorb enough nutrients from our food to maintain healthy levels of vitamins and minerals in our bodies. But is this true?

Calcium and vitamin D are often recommended for osteoporosis prevention and treatment, with calcium absorption in the small intestine declining with age.

In America 60% of women take a calcium supplement, although many nutritional experts encourage patients to consume calcium via food. In the UK up to 5 million people take calcium and vitamin D supplements in an attempt to avoid osteoporosis in later life.

A recent small trial published in the journal Bone Reports compared 4 servings per day of dairy foods to the same amount of calcium and vitamin D from supplements.

» Post-menopausal women may benefit from extra calcium to help protect bones. The question is whether supplements or food are the best source.

» A new study compared equal amounts of calcium from supplements and food and found no differences in calcium absorption.

» It did find, however, that women who consumed high calcium dairy products also consumed other bone-building nutrients such as magnesium, potassium and folate, suggesting that dietary adjustments may bring other important benefits.

For the first 180 days of study, the women maintained their low dairy diets, but received a daily oral calcium supplement and researchers measured how well the bones absorbed it. Regular urine samples also allowed researchers to measure how much calcium was being excreted.

In the second part of the study the women were randomly assigned to one of two groups – calcium supplements or a diet which included more high calcium foods from dairy. The women followed their regimen for 6 weeks, then after a 6 week washout period in which they had no supplements or dietary intervention, they swapped groups.

The women’s overall energy intake was adjusted to account for the energy associated with the dairy servings.

Those in the supplement group took a 600 mg calcium tablet twice daily and a vitamin D supplement (400 IU vitamin D3 per tablet) once daily.

Urine and blood tests were taken regularly throughout the study. The women also recorded a 3 day weekly food intake during each intervention. Body composition as well as bone mineral content and density were measured.

The team found that calcium and vitamin D from either dairy foods or supplements were equally well metabolised. Both interventions showed a boost in calcium levels within 1-2 weeks, however during the washout period calcium levels returned to lower pre-trial levels, suggesting the body needs continual ‘top-ups’.

The study authors found no differences in the anti-resorptive [bone strengthening] effect of the calcium supplement versus dairy foods, “but the advantage of dairy food becomes evident when dietary intake data are examined,” they write

They note that during the dairy intervention participants will have consumed significantly greater amounts of protein, carbohydrate, vitamin A, zinc and potassium.

Compared to the washout period they also had increased dietary intake of folate, phosphorus and magnesium, which are all nutrients recognised as bone-enhancing.

A six-week study is perhaps be too brief to draw definitive conclusions. However a previous 16-week trial comparing 1200 mg/day calcium from semi-skimmed milk vs no milk supplement found that the dairy regimen appeared to decrease several markers for osteoporosis including the rate of bone turnover.

There is also evidence that people taking calcium supplements may be at an increased risk of heart attack – whereas those getting their calcium from dietary sources had no such increased risk.