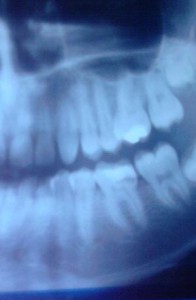 Frequent dental x-rays have been linked to the most common type of brain tumour [Image: Muffi - Wikimedia Commons]

The study published early online in Cancer, found that adults with meningioma, a usually benign brain tumour that can nonetheless grow and cause health problems, were more likely to have had dental X-rays once per year or more than adults without meningioma.

Ionising radiation is the primary environmental risk factor for developing meningioma. medical x-rays such as those used in dentistry, are the most common artificial source of exposure to ionising radiation for most of us.

To examine the link between dental x-rays and the risk of developing meningioma, researchers studied information from 1,433 patients who were diagnosed with the disease between the ages of 20 and 79. The patients were residents of the states of Connecticut, Massachusetts, North Carolina, the San Francisco Bay Area and eight counties in Houston, Texas, between 2006 and 2011.

The investigators also studied information from a control group of 1,350 individuals who had similar characteristics but who had not been diagnosed with a meningioma.

Over a lifetime, patients with meningioma were more than twice as likely as controls to report having ever had a bitewing exam, which uses an x-ray film held in place by a tab between the teeth. Individuals who reported receiving bitewing exams on a yearly or more frequent basis were 1.4 to 1.9 times as likely to develop meningioma as controls (risks differed depending on the age at which the exams were done).

An increased risk of meningioma was also linked with panorex exams (which are taken outside of the mouth and show all of the teeth on one film) taken at a young age or on a yearly or more frequent basis.

The researchers noted that today’s dental patients are exposed to lower doses of radiation than in the past. Nonetheless, “the study presents an ideal opportunity in public health to increase awareness regarding the optimal use of dental x-rays, which unlike many risk factors is modifiable,” said lead researcher Elizabeth Claus, MD, PhD, of the Yale University School of Medicine in New Haven and Brigham and Women’s Hospital in Boston.

Dental x-rays have also been linked to thyroid cancer. After factoring in any hospital X-rays participants had had, they found that men and women who had had up to four dental X-rays were more than twice as likely to have developed the disease than those who had never had any. Between five and nine X-rays and their risk rose more than four-fold, according to the 2012 study in the journal Acta Oncologica.

A 2006 statement by the American Dental Association highlights the need for dentists to examine the risks and benefits of dental x-rays and confirms that there is little evidence to support the use of dental x-rays of all teeth in patients who do not experience any symptoms.

In the UK guidelines laid down by the Health Protection Agency note: “A number of publications have drawn attention to the poor quality of many dental radiographs, to the point where a significant proportion may be of no practical clinical value. It is particularly important in dental radiation protection to ‘avoid those exposures which have no merit’.”

Dental x-rays can only be justified if they can reliably provide “new information to aid the patient’s management or prognosis.”

Yearly x-rays may not be necessary and patients should be encouraged to discuss their options with their dentists and be particularly cautious where children are concerned.

Frequent dental x-rays have been linked to the most common type of brain tumour [Image: Muffi - Wikimedia Commons]