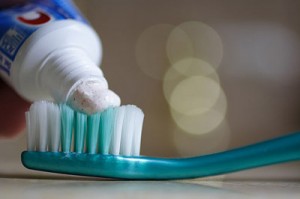 Studies show there is enough fluoride in a 100ml tube of toothpaste to kill a small child [Image: Thegreenj - Wikimedia Commons]

Q&A: What’s so bad about fluoride?

Q – I’ve read that fluoride is not really that good for teeth and that it could even be a poison. Is this true and if so how is it possible that we use it in toothpaste – something we put in our mouths?!

A – There’s no short answer to this question! Fluoride is a naturally occurring mineral. Though it’s not an essential nutrient it is present in many foods. However, today we are exposed to fluorides from a wide range of sources, including air pollution, drinking water, toothpaste, mouth rinses,  beverages, medicines, anaesthetics, fluoride supplements, pesticide and herbicide residues.

For most of us our main exposure to it is through our water supply and through toothpaste and mouthwashes.

Like so many everyday substances that have been found to be toxic, fluoride has its roots in World War II research into weapons of mass destruction. Massive quantities of fluoride were essential for the manufacture of bomb-grade uranium and plutonium for nuclear weapons throughout the Cold War.

Post-WWII, fluoride was a popular form of rat poison. However, as fluoride production began to greatly outstrip its use as a rodenticide, scientists were spurred on by industry and the government to find other uses for it.

Today, fluoride is routinely added to the water supply of around 10% of the UK population (though this figure is set to rise) and more than 60% of the US population. These figures are in stark contrast to the 98% of Western Europe that has rejected fluoridation on the grounds that it does not work and that it is morally reprehensible to forcibly medicate whole populations of people.

While most of us have been taught that fluoride protects teeth, research does not bear this out. Most studies into the benefits of fluoride are based on calcium fluoride rather than the more toxic form that is added to our water supply.

There are significant differences between naturally occurring calcium fluoride and what is essentially industrial waste – namely, hydrofluorosilicic acid, a byproduct of the phosphate-fertiliser industry – added to our water, and known to contain human carcinogens in a toxic mix of arsenic, beryllium, lead, cadmium, mercury, silicon and other major contaminants, including radioactive polonium.

It is possible that some might reason that small quantities of these toxins are worth the risk if it means better teeth. But the largest dental survey ever conducted in the US (by the National Institute of Dental Research [NIDR] and involving more than 39,000 children) found virtually no difference in the incidence of tooth decay between children living in fluoridated and non-fluoridated areas (and yet inexplicably concludes we should continue to fluoridate water!)

In addition, several review papers have attested to the fact that dental decay does not increase when communities stop fluoridation.

Instead, fluoridated water is responsible for increased rates of fluorosis (where teeth become white-spotted, yellow, brown-stained or pitted, the result of what one researcher calls chronic fluoride toxicity).

In a study published in the British Dental Journal in 2000, leading UK researchers from Newcastle City Health NHS Trust, for example, found that the prevalence of dental fluorosis among 8 – 9-year-old children in fluoridated Newcastle was 54%. In “fluoride-deficient” Northumberland, where the water isn’t fluoridated only 23% of 8 – 9-year-old children had dental fluorosis. They concluded that the prevalence of “aesthetically important” fluorosis in the fluoridated area was 3% – six times higher than found in the non-fluoridated area, where 0.5% of the children were affected.

What this means is that over-exposure to fluoride is possible, even in areas where the drinking water is not fluoridated usually from sources, including those not intended for ingestion, such as toothpaste.

While it has long been believed that fluoride has a half-life of 3.5 hours (the time it takes to clear from the body), studies into fluoride poisoning suggest that it takes much longer than that.

When a community in Alaska was poisoned with fluoride due to a malfunction in the fluoridation-equipment system, blood fluoride levels did not return to normal within 24 hours, as would be expected. In fact, 19 days after the poisoning, the average level of fluoride in exposed individuals was still nearly three times the level of the few non-poisoned individuals residing in the same community.

As a general rule, approximately half of each day’s fluoride intake is retained. The rest is absorbed into calcified tissues, like bones and teeth, as well as some organs.

Indeed, fluoride has a particular affinity for bones, and there is some evidence linking it to an increased risk of hip fractures – though much depends on the level of exposure. Many studies conclude that water with 1-3 ppm fluoride is ‘safe’ but above that there appears to be an increasing risk.

How much is too much?

Since the 1950s, proponents of fluoridation have maintained that fluoridation of water at 1 ppm represented a minimal risk – between 2250-4500 times less than required to kill an adult and 250-500 times less required to kill a child. However, reports show that what is known as the ‘probably toxic dose’ (PTD) of fluoride – that is, the ingested amount that would require therapeutic interventions and hospitalisation – is actually much lower, between 32-64 mg of fluoride per kg of bodyweight administered in one dose.

Studies show that we ingest around 33% of the toothpaste we put on the brush. How toxic that is depends on what type of fluoride is in the products you use.

Lethal dose figures refer to pure fluoride, not sodium fluoride, which is a mixture of sodium and fluoride or other fluoride compounds such as sodium monofluorphosphate. You would, for example,  need to ingest 5–10 g of sodium fluoride to reach a lethal dose. Nevertheless, current toothpaste formulations do contain sufficient fluoride to exceed the PTD for young children.

For instance, a 10-kg (22 pound) child who ingests 50 mg of fluoride (roughly equivalent to one-third of a tube of toothpaste containing 1500 ppm or one-half of a tube of 1000-ppm toothpaste) will have ingested a probably toxic dose.

Put simply, this means that there is enough fluoride in half of the average 100-mg tube of toothpaste to kill a small child.

In the US, fluoride-containing toothpastes now come with a health warning and information on how to contact your local poisons control office in the event of accidental ingestion. The UK has yet to follow suit.

Dental health is enormously important. It affects not just what goes on in your mouth, but the health of your whole body. Poor dental hygiene is linked to a higher risk of heart disease and stroke, for example. For more on this see our article, Naturally healthy teeth and gums.

It’s fair to say government health departments and dental associations, supported by a powerful chemical industry, continue to be staunch supporters of fluoride and water fluoridation and that there is a huge gap between the views of environmental and health campaigners and that of officialdom.

If you want to keep using fluoride toothpaste, consider using less. It’s more economical and gets the job done just as well. Adults only need a pea sized amount of toothpaste on the brush to do the job and children really only need a smear.

If you are alarmed by the data suggesting that fluoride is a systemic poison then the best advice is to switch to a non-fluoride toothpastes, and mouthwashes. Thankfully there are now many brands available.

It’s also worth reading more for yourself about fluoride products and fluoridation (see resources, left)

If you want to know how much fluoride is in the water in your area there are many resources available. In the UK you can find a map of typical fluoride concentrations in your area here. In the US the CDC has an interactive map that you can search, here.

Unfortunately it is nearly impossible to filter fluoride out of your tap water unless you have an expensive (and water wasteful) reverse osmosis filtering system. Your best bet is to avoid added medicinal fluoride in your daily routine. An organic diet will also help eliminate pesticides residues which may also contain fluoride.

Studies show there is enough fluoride in a 100ml tube of toothpaste to kill a small child [Image: Thegreenj - Wikimedia Commons]