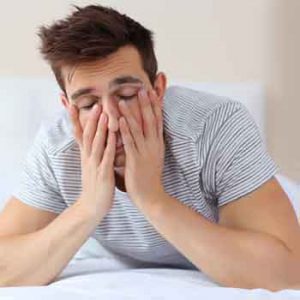 Long-term disruptions in sleep patterns, such as shift work, can nearly double a man's risk of cancer. [Photo: Bigstock]

Natural Health News — Men who have worked night shifts for more than 20 years, or who work night shifts without daytime napping, or sleep for more than ten hours per night on average may have an increased risk of cancer, according to a new study.

The study, led by scientists based at the Huazhong University of Science and Technology, Wuhan, China, reviewed data obtained from a large group (more than 25,000) of middle-aged and older Chinese people.

They sought to investigate the independent and combined effects of three sleep habits on cancer incidence; night shift work, daytime napping, and hours of night time sleep and used a questionnaire to understand the participant’s sleep habits over a 20 year period.

The authors report, in the Annals of Medicine, that men who had worked night shifts for over 20 years had a 27% increased risk of cancer incidence, and that men that did not nap in the day time had double the risk of cancer of those who took a 1 to 30-minute nap.

» A new study from China suggests that sleep disruption over long periods of time can raise men’s risk of cancer.

» It found, for example men who had worked night shifts for over 20 years had a 27% increased risk of cancer

» If shift work was combined with other poor sleep behaviours, such as not taking a nap during the day or getting less than the optimal amount of sleep daily, the risk rose to around 43%.

» In this study men were more affected, but previous studies have shown that women who are long-term shift workers are also at increased risk.

They also found that men who slept for more than ten hours per night had an increased risk of cancer. However, no such relationship was observed in women.

The researchers also found that male participants with at least two of these sleep habits (long-term night shift work, lack of daytime napping, or sleeping over ten hours per night) had a 43% increased risk of cancer incidence and a two-fold increase in cancer mortality compared to those who exhibited none of the sleep habits.

Other evidence has also suggested a link between insufficient sleep and the risk of cancer. In fact, in 2007, the International Agency for Research on Cancer (IARC) – an agency of the World Health Organization (WHO) – concluded that night shift work is “probably carcinogenic to humans.”

In particular, people with long-term circadian rhythm disorders – in which the body’s biological clock is disrupted because of shift work, for example – may be at increased risk.

A study published in 2013 found that women who worked night shifts for 30 years or more were twice as likely to develop breast cancer, though no link was found between higher breast cancer risk and periods of night work which were shorter than 30 years.

One possible reason for this is the hormone melatonin – which may have cancer protective properties. Exposure to light is known to reduce production of melatonin. Long term night shift workers going from a day environment to an artificial light environment at night may have chronically lower levels of this hormone.

Long-term disruptions in sleep patterns, such as shift work, can nearly double a man's risk of cancer. [Photo: Bigstock]