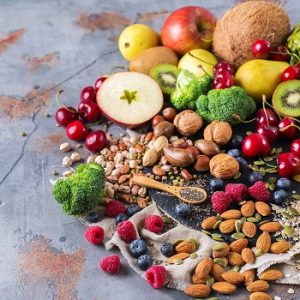 A healthy diet of antioxidant-rich foods and drinks could significantly lower the risk of developing type-2 diabetes. [Photo: Bigstock]

Natural Health News — Consuming antioxidant-rich foods such as blueberries, tea and walnuts can help to lower the risk of type-2 diabetes, say researchers.

A diet rich in fruit and vegetables has previously been associated with a lower risk of certain cancers and cardiovascular conditions.

The French researchers suspected there might also be a benefit for type-2 diabetes risk, on the basis of previous studies showing that certain antioxidants, such as vitamins C and E, lycopenes or flavonoids, could reduce the risk of the disease. However, these studies looked only at isolated nutrients, not at the total antioxidant capacity of the diet.

Writing in the journal published in Diabetologia, they suggest that dietary compounds with antioxidant activity may have cumulative/synergistic antioxidant effects, and therefore wanted to verify whether overall diet, according to its antioxidant capacity, is associated with diabetes risk.

» French researchers tracked the diets and health of more than 64,000 women over 13 years to see if eating antioxidant-rich foods could help lower the risk of type-2 diabetes.

» Results showed that women who consumed the most antioxidant-rich foods had a reduction in diabetes risk of 27%.

» Women who consumed the least coffee and the most fruit and vegetables had the lowest risk of developing type-2 diabetes.

Using data from a long term study of French women the researchers were able to track information on diet and diabetes for 64,233 women over a period of 13 years.

All the study participants were free from diabetes and cardiovascular disease at the time of inclusion in the study.

Each woman completed a dietary questionnaire at the beginning of the study, including detailed information on more than 200 different food items. This allowed the researchers to compare the women’s diet to existing databases on the antioxidant capacity of different foods and calculate a score for ‘total dietary antioxidant capacity’ for each participant. The group then analysed the associations between this ‘score’ and the risk of diabetes over the course of the study.

‘This link persists after taking into account all the other principal diabetes risk factors: smoking, education level, hypertension, high cholesterol levels, family history of diabetes and, above all, BMI, the most important factor’, said first author Francesca Romana Mancini.

Not all antioxidants are equal

The foods and drinks that contributed the most to a high dietary antioxidant score were fruits and vegetables, tea and red wine (consumed in moderate quantities). The authors excluded coffee from the analysis, because the high antioxidant levels in coffee beans might mask the effects of antioxidants from other sources.

They also state that the high molecular weight of the antioxidants in coffee means that they are not as well absorbed in the body as antioxidants from other sources. In the final analysis, in this study, women who consumed the least coffee and the most fruit and vegetables actually had a lower risk of type-2 diabetes.

Ms Mancini concludes: ‘We know that these molecules counterbalance the effect of free radicals, which are damaging to cells, but there are likely to be more specific actions in addition to this, for example an effect on the sensitivity of cells to insulin. This will need to be confirmed in future studies’.

A healthy diet of antioxidant-rich foods and drinks could significantly lower the risk of developing type-2 diabetes. [Photo: Bigstock]