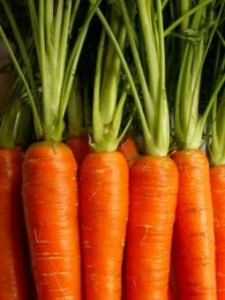 A diet that contains adequate carotenoid-rich foods like carrots, lettuce and spinach could be linked to healthier sperm

Natural Health News — You might not think of them as  superfoods, but carrots and other carotenoid-rich vegetables can boost male fertility, according to a new study by Harvard University School of Public Health.

Studying the effects of fruits and vegetables on ‘motility’ (the ability of sperm to swim towards an egg), researchers concluded that carrots are the food that seems to carry the most health benefits.

For the study, which was published in the journal Fertility and Sterility, researchers used a questionnaire to survey the diets and supplement use of nearly 200 young, college-age men in the Rochester, New York. They also tested the quantity and quality of the men’s sperm.

Each man provided a semen sample which was analysed within half an hour for:

From the food and supplement frequency questionnaire, the researchers were able to estimate the amount of the following micronutrients in the men’s diet:

With this data the researchers were able to look for links between the amount of each micronutrient consumed and semen quality.

Increased carotenoid intake was associated with sperm that moved 6.5% faster compared with those from men with the lowest carotenoid intake. This association was higher if the intake came from food rather than supplements.

The sperm boosting effect of carrots was attributed to the carotenoids, especially beta-carotene which the body converts into vitamin A, which in turn can support sperm health and neutralise free radicals. The carotenoid lutein was found to have a similar benefit to sperm health.

Higher intake of lycopene, which is found in large amounts in tomatoes, was associated with 1.7% higher numbers of normally-shaped sperm compared with men with the lowest intake.

However moderate amounts of vitamin C in the diet produced the highest sperm concentration, count and motility. Vitamin C was not related to any change in sperm shape.

In this study no associations were seen with intake of vitamin A or E, and none of the results were affected by BMI or smoking status. However in an older population, as previous studies have shown, the effects of these things might have been more apparent.

According to the researchers: “In a population of healthy young men, carotenoid intake was associated with higher sperm motility and, in the case of lycopene, better sperm morphology. Our data suggest that dietary carotenoids may have a positive impact on semen quality.”

But clean up your environment, too

Recent studies have indicated that average sperm count has decreased by more than half in western countries. Environmental toxins and physiological changes in the body, weight gain, a sedentary lifestyle, and high alcohol use, cell phones in pockets and estrogen in dairy products or water have all been linked to a decline in sperm health.

Apart from a diverse and antioxidant-rich diet, other ways to improve your sperm quality include:

A diet that contains adequate carotenoid-rich foods like carrots, lettuce and spinach could be linked to healthier sperm