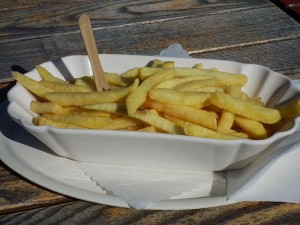 The new school year is nearly upon us and the news for parents is worrying.

The study by Oregon State University researchers surveyed the eating habits of 582 college students, a majority of which were first-year students. The study, in the Journal of Nutrition Education and Behavior, compares male and female students, and found that both were less than the optimal amount of fruits and vegetables. Male students had about five servings a week, slightly higher than female students who reported eating only about four servings of fruits and vegetables.

Both male and female students were consuming more than 30% of their calories from fat, which exceeds healthy eating recommendation of no more than 30% a week.

The larger take-away message from this study, says Brad Cardinal, a professor of exercise and sport science at Oregon State University and one of the study’s authors, is that proper eating and nutrition is not integrated enough into our society. “We are not teaching youth how to be self-sustaining,” Cardinal said. “Home economics and nutrition classes have all but disappeared from our schools… There is a fundamental lack of understanding on how to eat well in a very broad sense.”

Studies show that when people prepare food at home they tend to eat better and consume fewer calories. According to Cardinal, his survey showed that students ate out a lot and consumed at least one fast food meal per week.

“Health is an area being neglected,” he continued “yet all the available research show that healthy habits and healthy kids can lead to better academic success. We are doing a disservice to our kids by not teaching them these essential life skills.”