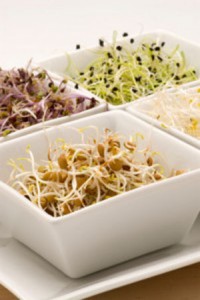 Raw food – is it the healthiest, and greenest, diet?

Raw or ‘living’ food diets are based on the premise that when you cook food, you kill it – you lose the vitality and ‘life force’ of the food.

According to Dr Brian Clement, the director of the Hippocrates Health Institute (HHI) in the US which pioneered the use of living foods for healing purposes in the 70’s, ‘cooking food above 42C destroys all of the enzymes in the food’. Clement describes enzymes as ‘the spark of all life’. The enzymes in raw food help start the process of digestion and reduce the body’s need to produce digestive enzymes.

Survival into the 21st Cenutry, written by HHI co-founder Viktoras Kulvinskas in 1975, is still regarded as the living foods ‘Bible’. In it, Kulvinskas advocates a diet consisting of fruits, vegetables, sprouted seeds and grains, grasses, weeds, algae and sea vegetables. Raw foodists credit the diet with all kinds of powers: clearing ‘brain fog’, boosting the immune system, a cure for depression, weight loss, even a more youthful appearance.

With at least 80% of food intake made up of raw plant, raw food diets are also good for the planet. Most of those who follow the diet are vegans although a growing number also eat raw dairy products to up their intake of vitamins and minerals.

Although the diet relies on a small number of exotic key ingredients such as bananas and goji berries, it’s possible to eat around a large proportion of locally sourced foods – especially if you grow your own.

Preparing food raw also eliminates the need to bake, fry or toast. Admittedly, there’s plenty of blending and juicing but much of the food is chopped, grated or mashed by hand. Even though personal rather than planetary health is the main motivation to ‘go raw’, its green credentials are an added bonus.

People go raw for many different reasons. The main motivation is to gain more energy but other reasons include losing weight, treating a digestive disorder or clearing up a skin condition. The greater the percentage of raw food in the diet, the greater the alleged health benefits.

Of the studies that do exist, some highlight the positive health impacts of the diet in certain scenarios that include lowering obesity and hypertension, decreasing the symptoms of rheumatoid arthritis and even reducing the risk of breast cancer.

Other studies show the potential long term risks, linking the diet with vitamin B12 deficiency, lower bone density, an increased risk of dental erosion and weight loss and amenorrhea (an absence of menstrual periods).

To the initiated, a raw food diet might seem restrictive and boring – a life of grated carrot, lettuce leaves and endless fruit.  But there’s a tasty, gourmet side to it too: raw chocolate brownies, ‘pasta’ (made using strips of carrot and courgette), raw pies and quiches, imaginative dips and pestos and if you invest in a dehydrator you can make ‘burgers’, cakes and cookies.

Is it good in the long term?

Barbara Wren, a naturopathic nutritionist and principal of the College of Natural Nutrition in Devon, says that raw food diets are not suitable in the long term, or for everyone. ‘For a period of time raw food can be very appropriate for some people but not to the exclusion of other foods, particularly in winter.’

Instead she promotes a form of integrated nutrition that draws from eastern traditions and includes raw and cooked food. Wren’s biggest concern with raw food diets is that they should be part of a wider health programme. ‘Raw food is detox. You’re creating so much elimination; you’re getting the cells to let go. You need techniques – enemas, rubs, baths and so on – to encourage the skin and liver to let it all get out.’

What about the raw foodist argument that cooking kills the enzymes? ‘There are other ways of augmenting enzyme activity – such as fermenting food to aid digestion,’ she says.

Conventional dietary advice does not promote raw food diets either. Sian Porter, a dietician and spokesperson for the British Dietetic Association (BDA) says that it’s fine to incorporate some elements into your diet. ‘But it’s about balance. The body needs a variety of foods to get all the nutrition.’

On the plus side, Porter says raw diets includes a lot of fibre, fruit and vegetables. Interestingly, she says it’s a ‘myth’ that raw food is better for you. ‘Some cooked food is more nutritious and more easily digested than raw. For instance, carrots and tomatoes have more nutrients when cooked. One reason is that cooking helps break down the cells in the food so the nutrients are released more quickly.’

The main risk, says Porter, is of deficiencies, particularly of calcium, iron, protein and omega 3 fatty acids. This is why the diet is ‘not suitable for children, breastfeeding mothers, anyone who’s anaemic or at risk of osteoporosis’.

Although those who include raw dairy or meats in their diet are less likely to suffer from deficiencies, there are additional safety risks if this type of food is not produced, stored or used appropriately. Pregnant women in particular should avoid these.

Kate Wood, the Brighton based author of Raw Living, who has followed a 90% raw food diet since 1992 has these tips:

An extreme raw food diet is not for everyone but the secret lies in finding a healthy balance between cooked and raw. At least you’ll taste the best of both worlds.