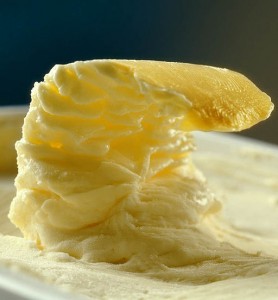 Some manufacturers are beginning to remove trans fats from their products, but they still lurk in spread and junk foods [Image: Klaus Höpfner - Wikimedia Commons]

In a new study researchers at the University of California, San Diego School of Medicine have shown that consumption of dietary trans fatty acids (dTFAs) is associated with both irritability and aggression.

The study of nearly 1,000 men and women provides the first evidence linking dTFAs with adverse behaviours that impacted others, ranging from impatience to overt aggression. The research, led by Beatrice Golomb, MD, PhD, associate professor in the UC San Diego Department of Medicine, has been published online by PLoS ONE.

The UC San Diego team used baseline dietary information and behavioural assessments of 945 adult men and women – of all ages, Caucasians and minorities – to analyse the relationship between dTFAs and aggression or irritability.

The survey measured such factors as a life history of aggression, conflict tactics and self-rated impatience and irritability, as well as an “overt aggression” scale that tallies recent aggressive behaviours. Analyses were adjusted for sex, age, education, and use of alcohol or tobacco products.

“We found that greater trans fatty acids were significantly associated with greater aggression, and were more consistently predictive of aggression and irritability, across the measures tested, than the other known aggression predictors that were assessed,” said Golomb.

“If the association between trans fats and aggressive behaviour proves to be causal, this adds further rationale to recommendations to avoid eating trans fats, or including them in foods provided at institutions like schools and prisons, since the detrimental effects of trans fats may extend beyond the person who consumes them to affect others.”

The findings don’t show why trans fats cause aggression. One suggestion is that trans fats inhibit the production of omega-3 fatty acids, which have been shown to reduce aggression. Or maybe there is something about people who are aggressive and irritable that makes them more likely to choose the kind of foods that contain trans fats?

The anger and depression matrix

In a related study Spanish researchers  looked a the diets of  9,000 people’s consumption of fast food and baked goods, such as pies and pastries, related to their risk of depression. Whatever the mechanism, it’s another good reason to cut your intake of processed food.

They found that researchers found that people who consumed the most fast food and baked good were 37% more likely to become depressed over a six-year period than people with the lowest consumption.  Although depression might seem the opposite of aggression, in psychological terms they are often part of the same emotional matrix.

Again it was theorised that  the tendency to consume fast food and develop depression may both have stemmed from some common factor in the person.

Whatever the mechanism, it’s yet another good reason to cut our intake of processed food.

Some manufacturers are beginning to remove trans fats from their products, but they still lurk in spread and junk foods [Image: Klaus Höpfner - Wikimedia Commons]