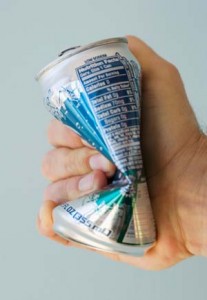 Researchers at the Johns Hopkins Bloomberg School of Public Health who examined national patterns in adult diet beverage consumption and calorie intake found that overweight and obese adults who drink diet beverages consume more calories from food than obese or overweight adults who drink regular soda or other sugary beverages. The results are published in the American Journal of Public Health.

“Although overweight and obese adults who drink diet soda eat a comparable amount of total calories as heavier adults who drink sugary beverages, they consume significantly more calories from solid food at both meals and snacks,” said Sara Bleich, PhD, associate professor with the Bloomberg School’s Department of Health Policy and Management and lead author of the paper.

Using data from the 1999-2010 National Health and Nutrition Examination Survey (NHANES), researchers looked at national patterns in adult diet beverage consumption and caloric intake by body-weight status. The NHANES is a population-based survey designed to collect information on the health and nutrition of the US population.

Diet sodas mess with your head – and waistline

Although the association  was based on data from dietary questionnaires rather than a forensic look at total diet over time, it adds to a growing body of research suggesting diet sodas don’t deliver the benefits the promise – and may even do harm

Consumption of diet soda has increased considerably in the past few decades from 3% in 1965 to 20% today. Individuals who drink diet soda typically have a higher BMI (Body Mass Index) and consume more snack food than those who drink sugary beverages.

Earlier research may explain why the investigators found higher consumption of solid food among heavy adults who drink diet beverages. Artificial sweeteners, which are present in high doses in diet soda, are associated with a greater activation of reward centres in the brain, thus altering the reward a person experiences from sweet tastes.

In other words, among people who drink diet soda, the brain’s sweet sensors may no longer provide a reliable gauge of energy consumption because the artificial sweetener disrupts appetite control. As a result, consumption of diet drinks may result in increased food intake overall.

Other evidence has suggested that regular consumption of artificial sweeteners could put some at higher risk of diabetes.

“The results of our study suggest that overweight and obese adults looking to lose or maintain their weight–who have already made the switch from sugary to diet beverages–may need to look carefully at other components of their solid-food diet, particularly sweet snacks, to potentially identify areas for modification,” said Bleich.