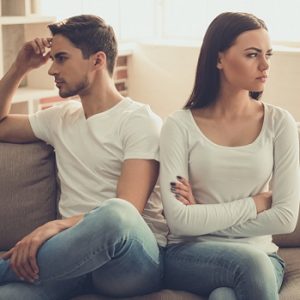 Marital arguments trigger the release of the 'hunger hormone' ghrelin in both men and women. [Photo: Bigstock]

. [Photo: Bigstock]Natural Health News — Arguing was a way of life for the 43 couples who participated in a recent study of how marital stress affects appetite and eating patterns.

Hostile exchanges were all too frequent for them, especially when certain topics came up.

This time, though, the arguments produced new insight for researchers, trying to understand  how social stressors affect appetite and diet.

For the study, couples agreed to attend two sessions, each 9 1/2 hours long, in which they would be with their partner, eat a meal together, try to resolve one or more conflicts in their relationship, respond to questions and agree to blood tests and other data collection.

» This is not just a psychological effect. in people of a healthy weight or who are obese arguments trigger the release of ghrelin – the ‘hunger hormone’, though this effect was not seen in obese individuals

» The researchers suggest that the standard  ‘prescription’ for weight loss of diet and exercise may not work under such circumstances and that other interventions may be appropriate to ensure long-term health.

Hormone levels were tested at four intervals, once before the meal, and three times after it – at two, four and seven hours after.

Results, published by the journal Clinical Psychological Science, showed that in people who were a healthy weight or overweight, hostile arguments between married partners often preceded a surge of the ‘hunger hormone’ known as ghrelin. Hostile arguments also were linked to poor food choices among the same group. The results were consistent, for both men and women.

The same effect however was not seen in people who were obese (as defined by a BMI 30 or higher).

No such correlations were found with leptin, the appetite-suppressing hormone.

That doesn’t mean arguments or hostility caused the hunger or poor dietary choices, said lead researcher Lisa Jaremka, assistant professor of psychological and brain sciences at the University of Delaware; but the correlation was a fairly strong one.

The study broke new ground by exploring the body’s ability to regulate appetite after an argument with a spouse, and may help researchers understand how marital difficulties ultimately result in health problems.

It also gave Jaremka the opportunity to test her theory that rejection and other relational difficulties could make people hungry, perhaps prompting them to seek relief from social isolation through food – and usually not healthy food.

“Comfort food,” at least in Westernised diets, typically has more fat, sugar and/or salt, she said, all of which can cause health problems.

“Right now, it’s one-size-fits-all – diet and exercise,” she said. “I hope this will help us start to tailor interventions. These studies suggest people have difficulty controlling appetite and with specific types of foods…. A personalised approach would be beneficial in the long run.”

Knowing whether those factors are part of a person’s life could help healthcare professionals develop more effective interventions for weight gain, she said.

Marital arguments trigger the release of the 'hunger hormone' ghrelin in both men and women. [Photo: Bigstock]