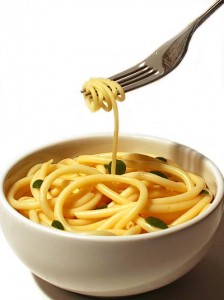 Eating most of your carbohydrates at night can help to feel fuller and aid weight loss [Image: jfelias - morguefile]

Natural Health News — Conventional dietary advice maintains that we should not eat carbohydrates at night if we want to stay healthy and keep the weight off. But a new study suggests this may be wrong.

Researchers reporting from the Hebrew University of Jerusalem have found that eating most of your daily carbohydrates at dinnertime could help you eat less, feel fuller for longer and provide other health benefits besides.

Eating this way, they say, influences secretion patters of hormones responsible for hunger and satiety, as well as hormones associated with metabolic syndrome. In turn this can help dieters persist over the long run, and reduce risk factors for diabetes and cardiovascular disease.

”The idea came about from studies on Muslims during Ramadan, when they fast during the day and eat high-carbohydrate meals in the evening, that showed the secretion curve of leptin was changed,” explained Professor Zecharia Madar, chief scientist at Israel’s Ministry of Education, who oversaw the study.

The research was carried out at the Institute of Biochemistry, Food Science and Nutrition at the Hebrew University’s Robert H. Smith Faculty of Agriculture, Food and Environment. The study was published in two  papers (here and here) in the journal Nutrition, Metabolism & Cardiovascular Diseases.

In particular, the researchers wanted to understand the experimental diet’s effect on the secretion of three hormones:

Results showed that this dietary change led favourable to changes in daylight hormonal profiles of the dieters.

Secretions of the satiety hormone leptin were higher during the day, only reaching a nadir in the late day; the hunger hormone ghrelin’s secretion curve were lower during the day, peaking only in the evening hours; and levels of adiponectin, considered the link between obesity, insulin resistance and the metabolic syndrome, was elevated.

The findings suggest there is an advantage in concentrating carbohydrate intake in the evening, especially for people at risk of developing diabetes or cardiovascular disease due to obesity.

While the researchers cannot, at this time, fully explain the mechanics of this diet’s influence on health, Prof Madar said he believed “The findings lay the basis for a more appropriate dietary alternative for those people who have difficulty persisting in diets over time.”

Eating most of your carbohydrates at night can help to feel fuller and aid weight loss [Image: jfelias - morguefile]